Itâs not all about the eggs. 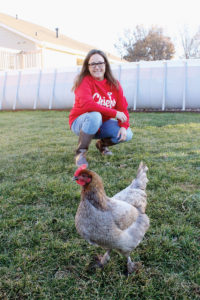 Gina Campos is affectionately known as âthe chicken ladyâ because of her backyard pen stocked with laying hens that produce several eggs a day.

When Gina Camposâ neighbors moved away from their current Waukee home, they gave Gina a few chickens. The chickens eventually died, and the only pet remaining was their dog. After a year passed, Gina missed her chickens and started adding several at a time. Now, sheâs happy to have the chickens back in her life.

âThey are fun pets to have,â she says.

A pen in the backyard is enclosed with chicken wire. The laying hens produce several eggs a day among the six different breeds of chickens. Eggs are one of the highlights of chicken ownership.

Yet, itâs not all about the eggs. Gina grew up in a small town in Iowa and loved farm animals.

âAs an 11-year old, I was envious of my friends,â she remembers. âI always wanted farm animals.â

Friends of Ginaâs joke that she has âno business living in the city.â Most of her neighbors are unaware they live next to a chicken coop. Her Waukee home has a pool, so the yard is fenced in.

âThe hens donât make a lot of noise,â she says. âThereâs no rooster, which would be too noisy and not allowed in the city limits.â

Chickens are easy to take care of. She and the rest of her family collect eggs daily. During the winter months, theyâll wrap the chicken coop in plastic and have a light bulb for heat. A water heater keeps drinking water from freezing, and Gina puts Vaseline on their combs (the spiky flesh on top their heads) to prevent frostbite.

Natural predators, such as raccoons, possums and owls, have sometimes taken chickens or killed them.

âWeâve had a problem with other animals,â she says. âSo we lock them up in the cages at night.â

The familyâs dog, Andi, sometimes wants to âplayâ with the chickens.

âIronically, Andi is a great bird dog,â she explains. âBut now he knows that the chickens are off limits and doesnât bother them.â

The chickens are useful, eating grubs and bugs in the yard. They also eat sunflower seeds, grains and leftover human food, such as vegetables, fruit and potato chips. Chicken poop is scooped and used for fertilizer for their garden and fruit trees.

Friends are quick to offer help if they go out of town.

âKids are always asking to be our chicken sitters,â she says.

As Gina stands on the patio, a chicken approaches and cocks its head before leaving with a handful of treats. After seeing the first birdâs outcome, the other chickens follow their leader, also awaiting a snack.

âPeople call me Gina the chicken lady,â she says. âI absolutely love them. They are peaceful birds and a fun pet to have.â ♦