An interview over broasted chicken from High Life Lounge 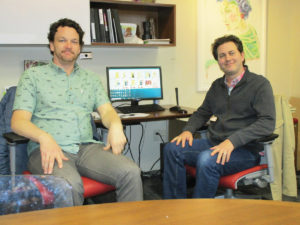 TJ Moberg and Ryan Mullin have been close friends most of their lives. Both went to East High School and developed a strong interest in the arts. TJ owns Moberg Gallery and is himself a successful artist in several disciplines. Ryan manages the gallery and also runs Toque Music, an agency that represents 11 different world music groups, plus various arrangements within them. We asked them to lunch recently to discuss the state of the arts business.

Moberg and Mullin chose to eat in their office and ordered their favorite carryout lunch â broasted chicken from High Life Lounge, a downtown cafÃ© and bar that specializes in nostalgia. Broasted chicken is a combination of fried and pressure-cooked chicken. It was extremely popular in the Midwest during the 1930s-1960s and is one of High Lifeâs specialties.

This marks Moberg Galleryâs 15th year. The gallery business is not an easy place for a young man (TJ was barely 20) to hang his hat. In fact, galleries were going out of business left and right when you opened the gallery in 2003. What were you thinking?

âAs an artist at the time, I didnât fit in with anyplace in town. No local gallery wanted giant art and an emphasis on large commissions. I showed my portfolio to several. Marlene Olson (then owner of Olson-Larsen Galleries) liked my work and encouraged me, but she wanted to see lots more volume before she would talk seriously about representing me, and I was too young to have much volume.

âThis place (2921 Ingersoll) became available. It was a clothing store at the time. I decided to open my own studio-gallery. We tore everything out. Todayâs office was my studio. No one walked in, so I got a lot of work done. I started with four artists â John Brommel, Bob Cooper, my Dad (Tom) and myself. The first artist outside that original group was J.D. Griggs, a painter from Agency, Iowa, who also owns the deli there. Then came Wendell Mohr, the late, great watercolorist,â Moberg said.

You talk about the lack of foot traffic as if it was a positive thing. Thatâs contrary to what most people think about the gallery business. Whatâs that about?

âI have always been focused on consultation and commissions. I stay busy all day if no one bothers me. Foot traffic hardly ever translates into business. There are some exceptions; people will walk in to talk about putting art in a new house. But for the most part, foot traffic does not mean serious customers. I recall a couple during the fair, in identical T-shirts, yelling âWhereâs the real art?â Valley Junction would suck in too much traffic, and weâd never get any work done. Then weâd have to hire someone just to wait on the walk-ins, and then weâd have to sell jewelry and Judy Whipple birds to pay their salary.

âI seriously thought about buying my own building on the Sculpture Park when my 10-year lease was up. That would have been just as bad for me as Valley Junction,â Moberg said.

What were the galleryâs big breaks?

âWhen we opened, there were nine galleries our size in the area. Within a year, more than half of them closed. We were able to get Chris Vance when ArtHaus closed. We got Bill Luchsinger and Karen Strohbeen from Karolyn Sherwood. John Philip Davis came over after Bauhaus shut down and Frank Hansen when Absolute closed. Those artists were the backbone of our exhibition schedule in the early years. Vance, Luchsinger and Strohbeen still are. That gave us an identity. We drew large crowds to openings, and that made serious art people aware of our inventory,â Moberg answered.

âAt a Chris Vance show, it seems like people come to party to art. They have a good time. We have really good beer and really cheap wine. Today, similar things happen with Sarah Grant and Scott Charles Ross, and with Larassa Kabel and Jordan Weber, too. We need foot traffic but the right people at the right time. The openings help with that. We donât look for tire kickers,â Mullin added.

âAnother big break was our first commission for Mercy Hospital. It led to so much other work â West Lakes, Mercy Clinics, etc. I think we got that because we made it clear we could stretch a small budget to look bigger by being willing to rotate art. We still do that,â Moberg added.

In fact, the gallery is planning to host Friday Night Wine Nights in addition to openings.

âWe have to get our beer and wine license first, but we think it will be a good way to show off the venue, let people see its potential to host private events. It wonât be cheap wine though. We are working with a French Algerian from Elkader to feature natural French wines. (Natural wines are farmed and made organically with no intervention into either process. Skins, stems and seeds are used and filtration is not.) We hope this will bring in traffic when we arenât working,â Mullin explained.

What are some of the craziest things the business has brought their way?

âFort Madison was nuts. We got a commission to put art in the penitentiary. We went down there for a consultation with the main architect. We had a nice dinner with martinis and wine and then at 9 p.m. he says, âItâs time to go back to the hotel.â We were in our 20s, there was a casino nearby. We didnât know how to go to bed at 9. We stayed out till 4 and showed up at the prison with three hours sleep and an obvious aroma. The first question I remember was âIs this your first time in prison?â and TJ answers âIn America,â â Mullin began.

âThey asked us what we wanted to see, and we said âEverything.â We saw their collection of homemade contraband weapons, solitary confinement â where one prisoner made spider web art and tailored a hat out of rat hides â and the wall and sniper rooms. Even the warden said he had never been on the wall. At the end, the Navy Seal who escorted our tour asked us, âSirs, just out of curiosity, you have all access clearance. Thatâs what the Governor gets. What are you guys doing here?â âJust doing art for the prison,â â Moberg said.

âOnce we had an artist come in because he needed help to super glue a hole in his foot shut. The only truly normal artists are the ones you never met,â added Mullin.

Whatâs new in the 15th year?

âRyan just finished making three totally new, integrated websites. They allow people to see just about everything that we can do for them. Prairie Meadows will soon be a virtual museum of Iowa art. We are doing some amazing installations out there. The constant is that we remain a gallery of Iowa artists above all else. Thatâs what business and people here want to support,â Moberg concluded. ♦