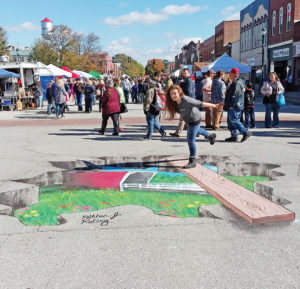 Roling stands on her 3-D art at the Covered Bridge Festival in Winterset.

When Kathleen Roling paints a picture, it sometimes doesnât last more than a few days â or even a few hours. Does it bother her? Not really. She knows itâs a one-of-a-kind creation every time she sketches with a certain medium â chalk.

Roling wanted to be an artist since she was in fifth grade and began doing chalk art by accident. Sheâd earned her degree in graphic design and desired a fulltime art position. Her sister pointed out a chalk art contest in Chicago, where she entered, winning first place.

While there, she realized chalk art also includes connecting with the public.

âIt was a good experience to get out of my comfort zone into public view,â she says. âIâve always been very shy and being in public was terrifying. To succeed as an artist or in a small business, I needed to do this.â

Shortly after that, she explored chalk artists and came upon Shaun Hays. Hays recognized Rolingâs talents and began mentoring her from afar. She finally had the opportunity to be at a job site in Indiana with him, where it was easier to learn in person.

There, she learned the 3-D chalk technique, which gives a passerby an optical illusion that the artwork is three-dimensional. Roling says, âItâs very unique. There are very few artists in the country that do it.â

Her chalk art has appeared at art festivals, celebrations and during an Iowa State Fair demonstration. The gig at the fair was âgrueling.â She did three large 3-D chalk drawings. Each took three days, working 14 hours. Sheâs bent over in a crouched position with hundreds of onlookers. Spectators stop, ask questions and snap pictures.

âItâs not about the art. Itâs also the entertainment aspect. People think itâs fascinating, and their reactions are hilarious,â she says. âThe 3-D looks best when itâs seen through the lens of a camera. Once people look at the camera, theyâll remark, âOh, my God, how did you do that?â â

Sheâs had a few disappointments due to the rain. At one art festival, she had to redo the image three times. At the Italian American festival, she attempted to cover up her art with a tent, plastic tarps and duct tape. During a light rain, she saved it; however, during a full downpour, the image disappeared.

âI had to redo the artwork in the middle of the event. It bummed me out, but you can only do so much when it rains,â she says.
Besides chalk art, she paints fine art, teaches After School Arts Program (ASAP) and Art Force for at-risk kids and wrote a Chalk Art Workbook. She wants to use her artistic talents to make the world a better place.

âIâm a prophetic artist. To paint, I pray and listen to what God wants me to paint,â she says. âItâs special part of what I do.â ♦