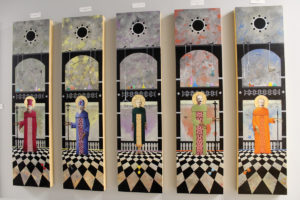 Jeff Rider works out of the Mainframe Studios. He doesnât sign the front of his paintings and feels the art should convey more importance than the artist himself. 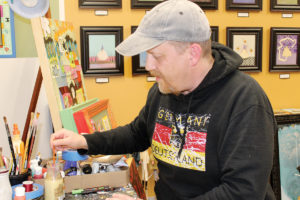 When you walk into Jeff Riderâs studio at Mainframe Studios, youâll find artwork with skeletons, a butterfly, candy corn and Monopoly play money. Glancing at the paintings, you wonder, âIs it surrealism? Modern art? Mixed media? Or (D) â none of the above?â

âI donât categorize my art,â says Rider. âSome call it surrealism. I donât latch on to someone in the past. Iâm a stickler for that. I donât piggyback onto someone elseâs work.â

Rider began painting at age 4 and sold his first painting of a famous baseball player at age 16. He received fine art and masterâs degrees from Grand View and Drake and currently works a corporate day job.

Rider gets his inspiration from the news and a mixture of politics, religion, sexual imagery and mental illness. He admits to having a âwarpedâ and dry sense of humor. Heâs not trying to make a bold statement, but whenever an idea pops into his head, he must paint it, saying, âI donât censor myself.â

He refrains from telling people how to interpret his artwork.

âI donât dictate how people should feel about my work,â says Rider. âI find thatâs a problem with modern art. People have gotten into a habit about how they should feel with art.â

Rider understands some people love or hate his work and hopes his art evokes an emotion or starts a debate.

âThe biggest insult is when someone says âmeh,â and it doesnât get any negative or positive attention,â he says.
He says, in his formative years, âweirdâ influences, such as Monty Python and H.R. Pufnstuf â not other artists â inspired his paintings.

Early on, he began cutting out faces from old photos and incorporating them into his paintings, after finding a babyâs photo with a priceless expression.

âI was just going to draw the babyâs photo, but thought nobody would believe the babyâs look was so dumbfounded,â he says.

Riderâs latest venture is creating a series of paintings called âPhobia.â Heâs completed 115 paintings of phobias, such as fear of spiders (arachnophobia), as well as invented, whimsical phobias.

The Phobia series evolved after listening to fabricated stories in the media, and he hopes to disarm peopleâs fears.

He says, âPeople motivate through fear. Politicians can get elected based on fears. Iâm skeptical of people telling me I should be afraid of something.â

Rider believes in philanthropic work and donates paintings for charity. His favorite benefits The Cystic Fibrosis Foundation, since his daughter, Andrea, suffers from cystic fibrosis.

âI like to donate,â he says. âI think it should go toward something thatâs not about me.â

Heâs received accolades for his work, including Best of Show at the Iowa State Fair, an exhibit at the Polk County Heritage Gallery and others.

He rarely follows other artistsâ work, concentrating on his own.

âIf someone says my art looks like someone elseâs, itâs coincidence. I know that what comes out of me is all my own,â he says. ♦