Django moves on, Lzaza welcomes all 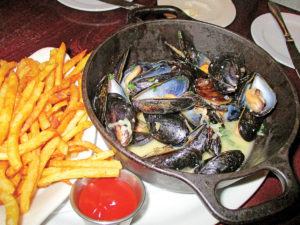 February brought us one of the rarest weeks ever for culinary celebration. Lunar New Year, Valentineâs Day, Mardi Gras, the first week of the Lenten Fish Fries and Bacon Fest all transpired over just five days. Valentineâs Day is the only one of those with a fixed date, and others can just as easily be two months apart as five days. Throw in the last week of the revered Django in its historic Hotel Fort Des Moines venue, plus unseasonably good weather, and it was a huge five days of special occasions for central Iowa diners. Django general manager Kris Van Tuyl said that Valentineâs Day was a work relief occasion this year because most tables were reserved for two people instead of four or six.

Django was packed nearly every lunch and dinner for a month after announcing they would close the venue and look for a new home. Ten years after being named one of Americaâs 20 best new restaurants by the James Beard Awards, it had endeared itself to Des Moines like restaurants exponentially older. Part of that was the venerable space it inhabited. It was one of the few places in Iowa that transported the diner to another time and place. The polished copper pots that greeted diners, the stressed tile floor, the different rooms, the horseshoe bar which always had a Wall Street Journal and a New York Times to peruse, and the visible oyster station and charcuterie slicer all contributed a little romance. A no corkage fee, ever, kept the big rooms full. It will be a huge challenge to transport the zeitgeist to a new location.

Reading through past criticisms of the restaurant, I found that two of my favorite aspects bugged other people â the original floor and large portions of food. The French and Quebecois recipes were meticulously researched, and though few restaurants in France would load so much food on a plate, they were quite in line with what Iowans expect. On my bittersweet final visit, we tried mussels meuniere with the restaurantâs exquisite frites, six kinds of oysters, coq au vin, a duck duo, and Coquilles St. Jacques. On my last lunch, I tried a Rossini burger with truffles, foie gras, demiglace and Swiss cheese. The recipes will translate to the new venue.

On a Sunday last month, I visited Lzaza, Des Moinesâ newest South Asian restaurant, with no expectations. I found a celebration of life and food. Situated in a building that once was a church, the place is a refuge for people of all religions or no religion at all. At a time when India and Pakistan regard each other with suspicion and fear, this cafÃ© welcomes Hindus, Muslims, Parsees, Ethiopian Orthodox Christians, heathens and anyone else who loves the cuisine.

A virtual fashion show broke out, especially girls and teenagers mixing and meshing styles of both Western culture and their parentsâ homeland. A daily buffet excelled. Tandoori chicken was represented not just by legs, but also thighs. Two kinds of biryani were filled with flavors. Vegan dishes all included cauliflower â the vegetable that best absorbs curries. Eight kinds of chutney were freshly made. Goat curry and chicken tikka masala were rich and spicy; in fact, I would rate this the spiciest South Asian buffet in town. Buttered naan was delivered fresh to the table. Ice water was constantly refreshed â my glass was never less than half filled.

The buffet is open 11 a.m. to 3 p.m. daily. Menu service is available through dinner and allows for five levels of spiciness.

The much-anticipated arrival of Donut King doughnuts at Bauderâs is expected in early March… According to the National Chicken Council, Americans ate 1.33 billion chicken wings on Super Bowl Sunday, a record. Thatâs about three wings for every human in America. ♦