Hugh Jackman does his best Rod Serling impression in this flick that leaves more ideas on the floor than on the screen. 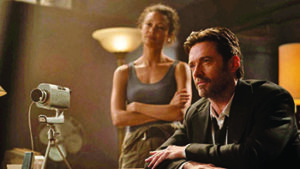 âReminiscenceâ is a futuristic noir with precious little on its mind. Instead of ideas, this sci-fi thriller offers half-remembered cop movie cliches and hard-boiled detective narration thatâs just barely a step above Harrison Fordâs in the original cut of âBlade Runner.â

Hugh Jackman is Nick, a former cop and former soldier in the not-so-distant future. Now a private detective making a living off nostalgia, he searches through peopleâs memories courtesy of an isolation tank full of water that allows the subject to relive memories and presents them in a hologram so Jackman and his overworked assistant (and war buddy) Watts (Thandiwe Newton) can pore over clues. They are set up in a moody old bank building in a neighborhood where the streets are flooded but still walkable. Nick got into the business as an interrogator during the war, and the pair still work with the DA when called upon to pry information out of the memories of suspects and witnesses. Mostly, though, their clients are just regular people wanting to relive better days.

As is often the case in films like these, our futuristic gumshoe meets a femme fatale (Rebecca Ferguson) who walks in ostensibly just to get help finding a set of lost keys. Soon she seduces him and then raids his vault to steal a specific memory that someone powerful would rather have forgotten forever. And thus, the film and its hardboiled hero set off on a journey to even the score and find out the truth about this mystery woman.

The filmâs high point is simply the look of the picture. As the effects of climate change continue to take their toll, most of the city of Miami is either sunk or sinking. Each day, the streets look like thereâs just been a hard rain, and the sewers are backed up always creating a couple of inches of standing water. The look is interesting, but it feels shallow. The wetter the neighborhood, the poorer it is â¦while the rich are the only ones who can afford to live on dry land, and theyâve built dams to make sure it stays that way. Despite all this, the film doesnât create much of a sandbox to explore. Thereâs also a subplot involving a dying land baron, social unrest over poor living conditions and his greedy relatives.

From the moment she walks in, Fergusonâs character is transparently trouble, but for some reason it takes Jackman the rest of the movie to figure it out. Our first glimpse of their meeting is revealed by way of Nick using his own technology to figure out how the relationship fell apart, because after a few months together, Mae cleared out her apartment and vanished without a trace. And then the film throws in a truly ridiculous ending, which suggests a focus group that was obsessed with trying to have things both ways â where bad people arenât so bad after all. So, the conflicted main characters arenât all that conflicted after all, and everyone gets some dignity and a happy ending.

The film feels overstuffed and rushed. No plot development has a chance to pack much of a punch. Itâs just clunky exposition that gets shoved away and evaporates almost as soon as it comes out of the charactersâ mouths. And it still manages to be boring and forgettable, despite the indifferently staged warehouse fistfights. The way the rich live in their own luxurious enclosed community, inhabiting dry land thatâs maintained by pumping water out into the poorer neighborhoods, is out of every other dystopian story. Itâs what is done with these ideas that matters, and the concept of coastal cities being turned into ad hoc versions of Venice by climate change isnât new, though itâs rendered in such an evocative onscreen manner that it feels like a waste when the film doesnât linger on locations and settings more as something lived in. Miami remains neon-lit in the face of the flooding, buildings partway underwater but still inhabited where they can be, residents gliding through what used to be South Beach in dinghies and going nocturnal to avoid the daytime heat.

âReminiscenceâ is the damnedest thing â a movie filled with promising concepts it doesnât get around to exploring, because itâs dedicated to a romantic mystery thatâs never very romantic or mysterious. ♦