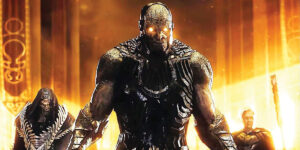 âZack Snyderâs Justice Leagueâ is finally here, and it is a markedly different film than what was released in theaters in 2017 after Warner Brothers brought in director Joss Whedon to finish the movie with various reshoots and edits.

First things first: Yes, itâs better than the original theatrical release. But four hours is one hell of a slog to get through, so words like âbetterâ or âworseâ perhaps shouldnât be taken at face value.

Since this movie has been released in one version or another for the past four years, I thought it might be helpful to break down everything that changed from one cut to another.

â¢ The R rating. One thing you could not miss is the overall tone of this flick. The theatrical version was rated PG-13, but the Snider cut is rated R for violence and some language, and it definitely earns it with tons of blood and both Batman and Cyborg getting in on the profanity. One of the major things that Snyder wanted to do with his version of âJustice Leagueâ was to have the film reflect that darker, more serious tone of his previous movies. However, Warner Brothers, with the Joss Whedon reshoots, tried to make the film echo the MCU schtick by giving it a less grim vibe and more comedy relief. Those are removed from the more dramatic Snyder cut.

â¢ A different score. The Snyder cut score by Thomas Holkenborg (aka Junkie XL) was replaced by Danny Elfman for the theatrical release, but now itâs back along with some new songs. Elfman usually goes hand in hand with DC projects. While his Justice League score wasnât bad, it was a far cry from his âBatmanâ days.

â¢ Desaturated colors are back. Itâs notable how the theatrical cut had brighter coloring, and the final battle was shaded in red, whereas the new version has Snyderâs signature desaturated colors, and that red filter is nowhere to be seen.

â¢ The Martian Manhunter. Jâonn Jâonzz, better known as Martian Manhunter, is one of several heroes we hoped to see in the theatrical cut. While we got no such appearance in that version, Snyder initially had plans for the character on a commentary track for the ultimate cut of âBatman vs Superman.â Snyder mentioned that Martian Manhunter was Lieutenant General Calvin Swanwick incognito in a storyboard that didnât make Whedonâs version. The Snyder cut officially solidified Swanwick and Martian Manhunter as one in the same when he visits Lois Laneâs apartment under the guise of Martha Kent.

â¢ Cyborg is the heart of the group. Cyborgâs entire story was rebuilt for the Snyder cut to position him as the heart of the story as Snyder originally intended. Overall, itâs not just Cyborgâs origin story that was missing from the theatrical cut but also his key role in the breaking of the unity, the full scope of the abilities heâs been blessed/cursed with by the Mother Box, and his relationship with his father, Silas Stone. Silas proves to be a key supporting character in the Snider cut, as we see more of his work at Star Labs.

â¢ Darkseid isâ¦ here. We knew Darkseid wouldnât be the central villain in the theatrical cut, but at the very least, we thought the film would set him up for future installments. Aside from a brief mention, Darkseid was a no show. Portrayed by Ray Porter, Darkseid made his long awaited live-action film debut â basking in the glow of empty life and of existence. This version also made room for some of Darkseidâs followers, including Desaad and Granny Goodness.

â¢ Understood motivations. This movie picks up following Supermanâs death knell that reverberates across the DC Universe and wakes up the Mother Boxes. This is of vital importance, as it is explained later in the film that we know it was the Mother Boxes that signaled to
Steppenwolf and his master Darkseid that the planet was vulnerable without a Kryptonian (Superman) there to protect it. The Snider cut also delves deeper into Steppenwolfâs backstory and motivation, as well as his dynamic with Darkseid.

â¢ Leto steals the scene. After the mostly negative reception to âSuicide Squad,â Joaquin Phoenixâs Oscar winning portrayal of Joker, and not even getting a cameo in âBirds of Prey,â Jared Letoâs future in the DCEU seemed to be up in the air. So you can imagine our surprise when Leto popped up at the end of the Snyder cut trailer, complete with longer hair and messy lips popping off about how âWe live in a societyâ¦â Although Snyder didnât originally intend to incorporate the Joker, Leto was enlisted after the directorâs cut got the go ahead. Joker plays an important role in this version, having stolen the Mother Box that allows the Flash to travel back in time. ♦