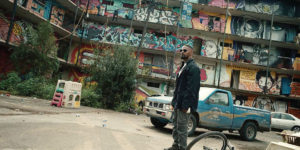 On the streets of New Orleans, word begins to spread about a mysterious new drug that unlocks superpowers unique to each user for five minutes (per pill). The catch: You donât know what will happen until you take it. While some develop bulletproof skin, invisibility and super strength, others might feel side-effects akin to a slight headache and spontaneous combustion. When the drug escalates crime within the city to dangerous levels, street-smart teenage rapper and dealer Robin (Dominique Fishback) and Art (Jamie Foxx), a mysterious veteran out to find his kidnapped daughter, team up with NOPD hot-headed-but-loveable cop Frank (Joseph Gordon-Levitt) to fight power with power.

Thatâs the premise behind sci-fi action thriller âProject Power.â And thatâs all it really explores. But more on that later.

While, on the page, the concept might be intriguing, the delivery leaves much to be expected. Like âLimitless,â the drug only gives users their powers for a short time â five minutes. Stealing from another film (âRequiem for a Dreamâ), the visuals of âProject Powerâ are intriguing when first introduced. They show both the userâs bodily reaction as well as his perception of the experience â a nice idea that quickly wears thin.

Jarring and violently heavy CGI sequences also distract from âProject Power,â which suffers from a muddled and confusing message. This is a movie not about superpowers but about the struggles that folks face every single day like making ends meet. Somehow the movie attempts to leapfrog around social commentary on growing up, the governmentâs direct control of Black lives, and the world in which Black women inhabit â while simultaneously attempting to speak to the shockwaves left in New Orleans after Katrina. The unremarkable thing is, these messages (like the drug in the movie) only last for a short time before theyâre ultimately past.

I wonder if this idea, and, more so, this potential message, helped to bring big names Joseph Gordon-Levitt and Jamie Foxx to the feature. Both are fine in their roles. They make their written characters more intriguing with their signature heroic screen personas, cementing their action-figure status as they trade tongue-in-cheek one-liners.

Whatever the case, the standout performer of this movie was Dominique Fishbackâs Robin (a not-so-subtle nod to Batmanâs sidekick). Her character was more fleshed out than the others so you could understand the circumstances that influence the decisions and actions she ultimately makes. No matter whom she shared the screen with, she stole attention every time.

The movie, co-directed by Henry Joost and Ariel Schulman, is loaded with action sequences that keep the kinetic pacing moving briskly. Unfortunately, these sequences leave much to be desired. Like some of the other Netflix Originals (looking at you, âThe Old Guardâ), âProject Powerâ seems to spend all its money on the cast, and the script and choreography are stranded with whatever might be left.

As usual, the downfall of âProject Powerâ is the same as all superhero films â the villains. As the central baddies, Rodrigo Santoro and Amy Landecker do not achieve the level of menace that would give the movie more gravitas. Their few scenes never establish the suspense or excitement, and that seriously undercuts the filmâs impact. Their characters seem like watered-down villains in search of some depth. Newt (Machine Gun Kelly), in a minor supporting role, would have been a far more compelling nemesis.

Considering Netflixâs success with its TV series, itâs somewhat baffling this wasnât optioned as such. As a 30- or 45-minute action series with a new baddie with new powers each episode, this could go deeper to explore each of the characters and the city they continually remind us weâre in.

Take it for what it seems to be going for â a ride rather than a masterpiece. ♦