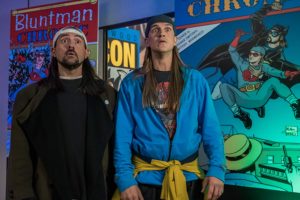 Note: Due to the impact of COVID-19, this monthâs review will be a little different. Since movie theaters are currently closed, we decided to look at streaming services. This movie is available on Amazon Prime, YouTube, Google Play, and Vudu. So whether you âNetflix & Chill, Hulu & Hump, or just RedBox & Jerk-Offâ (quote from the movie reviewed below), weâll be looking at current releases on streaming channels for the time being.

It’s fascinating to look at the reception to Kevin Smith’s latest film, “Jay and Silent Bob Reboot,” the long-awaited seventh chapter in the 25-year old franchise known as the “View Askewniverse.” On one hand, I can see where the negativity is coming from. “Jay and Silent Bob Reboot” is often messy, at times unfocused and, at its worst, forced (looking at you, Loki). It’s less a movie and more a string of skits tied together with the flimsiest of plots. But on the other hand, after the first 15 minutes of plot building, itâs really a lot of fun. I laughed quite a bit, was won over by the heart of what story there was, and had a wonderfully warm feeling of nostalgia throughout. I’d be lying if I said I didn’t enjoy the experience. It’s just, unfortunately, a bumpy ride at times.

Hetero-life partners, Jay (Jason Mewes) and Silent Bob (Kevin Smith) must set out to Hollywood once again when they discover a new film is being made out of the old comic-book, “Bluntman & Chronic,” which is based on their likeness. After a comical explanation of the differences between a reboot and a remake, the duo vows to get to Hollywood to stop the reboot from happening so they can get their names back. Jay comes across his old girlfriend Justice (Shannon Elizabeth) who reveals he is the father of her daughter Millennium Falcon (Harley Quinn Smith). He promises not to reveal himself as the father, but when she finds out that the two are going to Hollywood, she makes them take her and her friends, too. As the crew makes haste to southern California, Jay starts to understand what it takes to be a father while Millennium Falcon has her own dreams with the âBluntman & Chronicâ reboot. Along the way, they get into various misadventures, as Jay, Silent Bob, Milly and her âyouthful and diverseâ group of friends get into a tangle with the Ku Klux Klan, beat up a pedophile and steal a few cars, all on the way to infiltrate a massive fan-convention where a key scene from the film is being shot. Oh, and there’s cameos galore as many familiar faces from the “View Askewniverse” make appearances, often in very surprising ways.

Part of the great appeal of the film is having one more chance to catch up with the characters we love, and itâs a genuine pleasure to see them again. We get references to pretty much every single one of his movies from âClerksâ and âMallratsâ to less cherished favorites such as âJersey Girlâ and âTusk.â âThe Dogmaâ scene with Matt Damon is hilarious but very clearly a joke Smith couldnât fit within the story he was telling. Despite having aged quite a bit since their last outing, Mewes and Smith slip right back into the shoes of their stoner alter-egos seamlessly â though clearly not much has really changed. Silent Bob is vegan now (after Smithâs real-life heart attack) and has a newfound way to communicate using his smartphone and emojis.

Appearances from frequent Smith collaborators including Jason Lee, Brian O’Halloran and Ben Affleck are welcome and help tie the film â and the series â together. Some fans might be caught off guard by the emotional payoff of the âChasing Amyâ callback. Ben Affleck and Joey Lauren Adams reprise their roles and give a peek at what these characters are doing 22 years later. Affleck delivers a wonderfully stirring monologue about love and family and death, giving the film even more of an appealing and lovely sense of nostalgia.

For all the film does right in the nostalgia department and humor, it’s just not well made. You can tell they had a lower budget this time around, and Smith doesn’t make the most of it. It’s often flat looking and doesn’t have a sense of scope. For a road-trip movie, it feels like it was shot on studio-backlots and sets. The writing is about as flimsy as it could be. While the emotional storyline of Jay and his daughter Milly is genuinely well-executed, the rest of the script is patchy and uneven. There are also minor issues with the pacing, as some scenes go on a bit too long, and some of the cameos feel stretched out.

As wonky as the execution may be, the charming cast and good humor make the experience worthwhile. I laughed at the jokes. I enjoyed the film’s emotion. And I really enjoyed the nostalgic throwbacks to the earlier films. It was awesome to see characters reunited from movies I watched in high school. ♦