Nothing is what it seems

âThe Lighthouseâ is a hypnotic and hallucinatory tale. 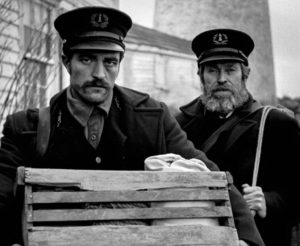 âHow long have we been on this rock? Five weeks? Two days? Help me to recollect.â

Nothing is what it seems at the uncanny lighthouse where Robert Pattinson and Willem Dafoe deliver a performance from beyond. The chemistry between the two of them grabs you on every level and emotion â from camaraderie and laughter to paranoia and discomfort â and never lets your attention go.

If youâre a fan of movies that leave you questioning what you saw, encourage conversations with others to confirm details, or drive you to do hours of research to figure out what exactly just happened, then this is the movie for you.

âThe Lighthouseâ is a hypnotic and hallucinatory tale that takes place around 1890 and centers around two âwickiesâ whoâve been tasked with the job of manning a lighthouse far from civilization on a desolate island. You watch as both descend into madness and the isolation that takes over when youâre forced to live with someone you hate. The movie chronicles these characters going stir crazy.

âThe Lighthouseâ is at its most frightening when the camera lingers on a character as the lighthouse horn blares with a cacophony of waves against the rocks. When the two characters in the movie slip slowly toward insanity, this unnerving feeling intensifies. Thereâs high tension and an uncanny atmosphere that allows dry humor and funny scenes without ruining the ambiance of the movie.

Thomas Wake (Defoe) is a superstitious, untrusting caretaker who seems to worship the light of the lighthouse. If anyone is the bad guy in this tale, itâs him. He is the embodiment of the supervisor who takes his job a touch too seriously. The little power he holds goes directly to his head, forcing his underling to do the jobs he doesnât want to do and not allowing him to get near the light. Because of this, Ephraim Winslow (Pattinson) immediately butts heads with him, especially when he has ambitions of taking care of the light.

Winslow doesnât believe in superstition. He is a wanderer, a man of few words in search of a job that leaves him fulfilled. Heâs had many in the past, most recently coming from the forests of the Canadian frontier. What becomes apparent, however, is that Winslow isnât so much looking for his passion as much as he clearly does not enjoy working. The sheer boredom he experiences on the island causes Winslow to escape into fantasies while the sanity and madness begin to blur and he slips into hallucinations and paranoia.

The relationship between Wake and Winslow is bipolar. One minute they might be calling for the otherâs death, and the next they are sharing a drunken slow dance before launching into fisticuffs and back to laying in the otherâs lap. These constant mood swings add tension to each scene and make them unpredictably nerve-racking.

On the final night of their four-week stint, Wake convinces Winslow to drink with him, eventually getting Winslow so drunk that they miss their boat the following morning. This act of stranding them on the island for an unknown period, coupled with a secret thatâs come to light, drives a massive wedge between the two men and adds to the paranoia and mistrust. Neither know the time it is, how long they have left, and who is hiding what from the other.

âThe Lighthouseâ is shot in black-and-white on an aspect ratio of 1.19:1 â an almost-square frame that was used in the early sound years by filmmakers. This creates a claustrophobic feeling in the space, which was a wonderful way to deliver the incredible facial acting of Robert Pattinson and Willem Dafoe on screen. This helps also in creating a world that feels familiar, but at the same time one that seems far from the truth that you know.

With stark imagery, taxing language and terrifying themes, âThe Lighthouseâ is a frightening folktale of the fantastical variety. ♦