Time to hang up the Neuralyzer

You may go watch âMen in Black: Internationalâ for Hemsworth and Thompson, but you will stay for Nanjiani. 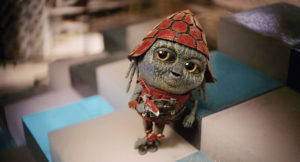 If youâre reading this, then that means they got you. Donât worry. I was fooled, too. You see, nostalgia is a powerful thing. That memory we share of a time when our country was welcoming to travelers from places unknown â and the excitement that prospect brought to us.

Skip ahead 22 years and youâll notice things have changed. It feels less about checking in and helping our foreign friends and more about rounding them up. The Men in Black might still be the galaxyâs defenders, but whether theyâre the best of the best of the best is, at best, arguable.

At the start of the movie, weâre given a little prologue that is helpful to set up the (non-) surprise twist at the end. Now, where the story begins is when we get to meet Molly, a young girl who meets an alien and witnesses her parents being neuralyzed. For the uninformed, think of this as a âclear historyâ of your short-term memory. This sets up an obsession with the men in black suits who track aliens on Earth. As an adult, Molly (Tessa Thompson), interviews with the FBI, CIA and other intelligence agencies and subtly tries to get them to hint at alien life, which is met with comedic results.

But her wits and gumption win out, as sheâs finally able to track down the Men in Black, which proves sheâs qualified for the job. (Honestly, this makes as much sense as when Tommy Lee Jones said Will Smith were able to capture an alien on foot when he clearly was hitching rides on any vehicle going his way, but I digress.)

After that, Molly â rechristened Agent M â is whisked to London and paired up with cocky Agent H (Chris Hemsworth). The plot essentially becomes a James Bond variation in which our two heroes have to stop bad guys from getting their hands on a world-threatening weapon, and the chase takes them from London to the crowded markets of Marrakech to a desert to a remote island fortress and a meeting with a ruthless arms dealer (pun very much intended). Thereâs also spin-off plots involving memory-loss, red herring baddies, and a mole in the organization â but, honestly, they didnât bother tying much up in terms of these stories, so why should I?

This film, which was mired in rewrites and production issues, feels like itâs trying to capitalize on nostalgia too much. As I mentioned, itâs definitely banking off your interest in the first installment (even the villain is basically the same), but itâs also leaning heavily on âThor: Ragnarok.â Yes, the rapport between Thompson and Hemsworth was great in that movie. It wasnât overdone or forced, but it felt authentic. Alternatively, this movie seems to be both. Hemsworth is basically Jack Sparrow in a suit while Thompsonâs flaw comes from the writers trying to overstuff her lines with cracks about the obvious gender-bias of her new employer. They both spend so much time talking over one another that most of the comedic bits are lost to a side-eye or scoff.

Amid the muck, there is one aspect I could not get enough of â Pawny. Played hilariously by Kumail Nanjiani, Pawny is the new alien sidekick. He has some of the funniest lines and even serves as a good replacement for Frank the Pug. As always, itâs nice to see Emma Thompson reprise her role as Agent O, and thankfully she doesnât have to perform any alien eulogies this round.

Not so much a movie to see at the theater, âMen in Black: Internationalâ is more a movie youâd put on after a long day at the office. But if you are drawn to the theater, hopefully itâs because your kid wants to go. Donât let nostalgia pull you in because you will leave disappointed. Or make sure you have a neuralyzer on hand to wipe your own memory. ♦