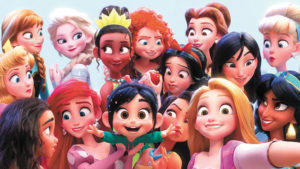 One could argue âWreck It Ralphâ is kind of like âToy Story.â The first installment was a sweet movie about going against your programming, about how your work doesnât totally define who you are, and it had some solid jokes, rooted in a true love for video gaming. There was imagination to spare, and its settingâs central premise â that thereâs a world inside your arcadeâs video game machine â was executed smartly.

Ultimately, âRalph Breaks The Internetâ loses more than it gains with the new location. Itâs engaging for a couple of minutes at a time and is occasionally heartwarming, but it evaporates as soon as you leave the theatre. So, in a sense, itâs a perfect representation of the online universe in which it takes place. But itâs also utterly unnecessary, existing only as a long, lumpy brand extension.

In âRalph Breaks the Internet,â video-game bad guy Ralph (John C. Reilly) and best friend Vanellope von Schweetz (Sarah Silverman) leave the comforts of Litwakâs arcade in an attempt to fix her game, Sugar Rush. Their quest takes them to the vast, uncharted world of the Internet where they rely on the citizens of the Internet â the Netizens â to help navigate their way.

Lending a virtual hand are Yesss (Taraji P. Henson), the head algorithm and the heart and soul of the trend-making site âBuzzzTube,â and Shank (Gal Gadot), a tough-as-nails driver from a gritty online auto-racing game called Slaughter Race, a place Vanellope wholeheartedly embraces â so much so that Ralph worries he may lose the only friend heâs ever had.

If the message of âWreck-It Ralphâ was to not put people in the little boxes society assigns them, then the sequel is a mushier muddle about setting people free if you really love them â or something.

By far the most interesting stuff is when Disney pokes fun at itself â represented as a chaotic mishmash of its classic cartoons and IPs it has acquired in recent years: the Muppets, Marvel Comics, and Star Wars. Itâs the sort of thing youâll want to freeze-frame when it comes out on video so you can catch all the Easter Eggs and inside jokes.
This leads to Vanellope, whoâs at least nominally a princess, landing in the quarters of all the Disney princesses â Snow White, Moana, Rapunzel, Belle, Pocahontas â you name her, theyâre here. Thereâs the downside to being a princess, like being expected to wait for a strong man to solve all your problems â but also the bliss of finding your voice and your perfect dream song. Together they all share a freewheeling moment where they trade out their stiff gowns for comfy sweats and talk about the foibles of their trade.

Luckily, these women pop up again for a few more quips despite a lackluster third act, giving all those princesses a chance to flip the script on their traditional gender roles.

Despite a mildly ambitious fish-out-of-water concept, the scattershot script for this follow-up is missing the freshness and emotional stakes of the original. Rather than wrecking (or breaking) the Internet, this movie pokes at it without engaging with it. ♦