To think that it has been two years since the last Iowa State Fair is bonkers to me. I did attend the food truck deal they had last August, which was fun but obviously not the same. I am also a firm believer that anyone who eats State Fair cuisine should walk a mile or two before and after, or at the very least include your favorite antacid for dessert. But this year, the Iowa State Fair is back in full swing. My father even informed me that he has purchased five tickets to the Doobie Brothers performance this year. I have only known the Iowa State Fair to be as it is now: the stock shows, the food, and the Grandstand performances. I worked on a special with Viceland a few years ago where I got some behind-the-scenes access and then produced a short documentary on the Iowa State Fair parking lots the following year called âFairtown.â So, needless to say, I do find the Iowa State Fair fascinating. 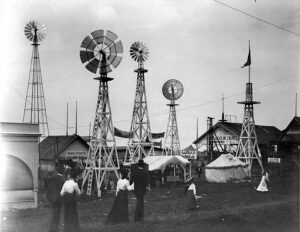 Most of my story ideas originate from sitting in the chair at my barbershop and listening to wise Des Moines man, Rick Adkisson, tell me stories while he keeps me from looking like a feral creature of the night. We got to talking about the Iowa State Fair of decades past, which included a sideshow exhibition, the girlie show, and Bobo the clown â whom you could pay money to dunk in a tank while he harassed you verbally.

âThat was back in the 1960s,â says Adkisson. âI was too young for the girlie show, but I did see the worldâs largest man. He would sit on a bike, and the tires would go flat. Old Bobo would harass the drunks, and they would pay per throw to try and dunk him in a tank.â

Jim Sheldon also remembers checking out the sideshow acts when he was a kid.

âOne story I had was when I was about 9 or 10 my grandparents took me to the fair,â says Adkisson. âBack then on the midway, there were several sideshows that you could go to. Most of them were bizarre. Well, they decided to take me to see the Siamese twins. They were joined at the stomach.  They were maybe 2 years old. That was the last time I went with my grandparents.â

Jeanie Snyder attended the Iowa State Fair in the 1950s when her family would bring them in from Audubon. 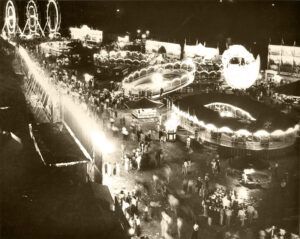 âWhen we were little, a booth at the fair sold little lizards â purportedly chameleons â  wearing a tiny collar and a leash clipped to a safety pin. The idea was that you would pin it to your clothing and the âchameleonâ would change color to match whatever it was pinned to. My brother spent his money on one and then forgot it when he changed clothing at the end of the day, so the poor thing went through the wash where my mother found it floating. Thankfully it didnât go through the wringer.â

James Stordahl, a fine actor in his own right, ran the admissions and stamp stop a few years ago.

âIt was the place where you got the colored rubber stamp on your hand to cover frequent entries and exits to the Fair. It was at the base of the hill leading up to the campground,â says Stordahl.

âWe found out the population expanded to 12-15,000 during the Fair. Families would pack into any camper or RV, some of which were 30- or 40-year veterans at the same site,â Stordahl adds, noting that the campgrounds have a community shower, clubhouse, grocery store and the Fair police.

âThe campgrounds are worth the visit,â Stordahl says. He is right. For the âVicelandâ shoot I was on, we walked through the campgrounds and found families who have had multiple generations at the same campsite. I even found a small tiki-themed RV where we stopped for a mai-tai and beer pong. 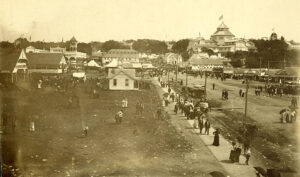 The culture of the Iowa State Fair is something that takes time to appreciate. As kids we just thought about it as something our family was forcing us to go to. We didnât appreciate the experience of the whole thing until we grew older, and we then realized what it does for our state culturally. Moving away from the old school carny/circus style sleaze to the more family friendly environment was a good one considering the Iowa State Fair is one of the biggest and most anticipated state fairs with many people from around the world visiting this great event in Iowa. ♦