Remembering âA Thief in the Nightâ 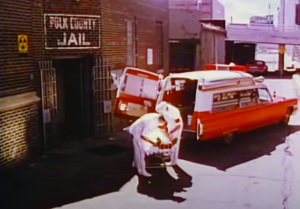 Scenes from âA Thief in the Night.â Courtesy of Mark IV/Heartland Productions.

Des Moinesâ forgotten history includes the making of feature-length Christian films in the 1970s. It actually goes back to the late 1960s with a man named Russ Doughten from Carlisle who saw an opportunity to produce evangelical Christian/faith-based films and distribute them through church organizations to be used as learning tools. This was already happening through 16mm educational films that kids saw during Sunday school, but Doughten wanted to make something much more dynamic.

Doughten was both a Drake and Yale alumni, having studied drama at both universities. He even spent a short time in Los Angeles working with legendary producer Jack Harris on the 1958 horror picture, âThe Blob.â Doughten partnered with Donald Thompson, who had been involved with writing short films for General Motors. In 1972, Doughten mortgaged his home to get the money for the partners to make their first feature length movie, âA Thief in the Night.â This was also the beginning of Mach IV Pictures. With a budget of less than $70,000, Thompson directed the picture and Doughten acted as the producer. They filmed in Carlisle, Des Moines and Pella. 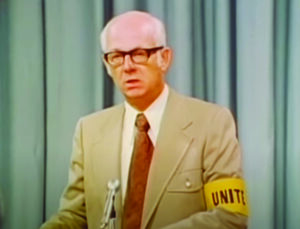 What makes âA Thief in the Nightâ a fun watch is that it is about the end of time. The rapture happens, and a young woman is too busy living in the present and has little concern about her future. She wakes up one morning to find her husband has disappeared. She wanders through downtown Des Moines where the police are rounding people up. An emergency government system is now in place, and United Nations Imperium of Total Emergency (UNITE) is a sort of police organization that declares anyone without the mark of the beast (666 tattooed in binary) will be arrested.

The movie earned $4 million within the first 10 years of its release and started a new form of distribution through evangelical church organizations. Most of the earnings came from donations. The Des Moines scenes are a nice flashback to our city during a time that seems so far away now. Granted, most of the scenes are fast-paced chase scenes with UNITE in pursuit of the protagonist.

A memorable moment that sticks out is the opening title song by Larry Norman called âI Wish Weâd All Been Ready,â which would later become an anthem for the evangelical movement. It was performed by a group called The Fishmarket Combo and plays in full at the beginning of the movie. âLife was filled with guns and war and everyone got trampled on the floor, I wish weâd all been ready,â are the first lyrics you hear and foreshadows what takes place in the film.

The movie spawned three sequels: âA Distant Thunderâ (1978), âImage of the Beastâ (1981) and âThe Prodigal Planetâ (1983). However, the partnership between Doughten and Thompson dissolved in the early 1980s. Both men continued producing films on their own.

Doughten worked under the name Heartland Productions, and Thompson went on to work with many companies as a producer/director/writer. Doughtenâs son Tim, who started in the business working for his dad in the 1970s, went on to work for director John Carpenter as a grip on âThe Fogâ (1980), as well as classic cult movies including âRock n Roll High Schoolâ (1979), âBlue Sunshineâ (1977), and âPiranhaâ (1978).

Thompson passed away in 2019 with more than 20 titles under his belt. Doughten died in 2013, and his son Tim continues to run the company that distributes all of his films. In fact, âA Thief in the Nightâ is available on Amazon Prime along with the rest of the sequels. I am not a big follower of radical scare films, but these are a step above films like âReefer Madnessâ (1936). There is a homegrown organic feeling to them that is charming and, might I say, unforgettable. ♦