The early days of KFMG

The numbers on the dial changed, but Ron Sorensonâs commitment to the station and the Des Moines community remained consistent through the years. 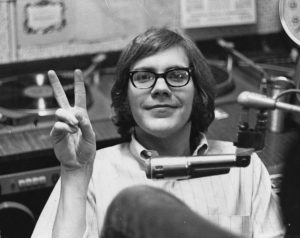 A young Ron Sorenson behind the mic at the first 94.9 FM KFMG that was located at the Brown Hotel on Fourth and Keo. Photo provided by Ron Sorenson

Ron Sorenson had no interest in a radio career. He loved music. He listened to it on the radio. He even played in a folk band called The Castlegate Singers while in high school. But Sorenson says working at a radio station never crossed his mind.

Bill Plymat was a friend of Sorensonâs who had a late-night folk music show on what was at the time a classical music station on 94.9 FM KFMG, located at Fourth and Keo inside the Brown Hotel. Plymatâs parents owned the station, and he took a liking to Sorensonâs folk group and even recorded a few of their performances. In 1968, Plymat went off to college and Sorenson took over the folk music radio program, âThe Late Folks,â on KFMG. Sorenson received his first taste of radio on 94.9 FM (now KGGO) hosting âCandlelight and Silver,â which was dinner music from 5-7 p.m., and then he would cover âThe Late Folksâ from 10 p.m. to midnight.

âWe werenât producing commercials or recording them in advance, so we would have this book of ads that we would just read from in between the songs,â Sorenson remembers.

As folk music of the 1960s faded out, progressives like Bob Dylan were plugging in and making rock and roll. Sorenson started what was one of the first progressive rock radio programs in Des Moines on 94.9 FM KFMG, called âThe Roc Show.â Regular artists included The Doors, Frank Zappa and The Byrds.

âAnything that was around that 1968 era, we were playing,â Sorenson said.

Plymatâs parents sold the station to a group of doctors who thought that owning a classical radio station would be a great idea. During this time, Sorenson said, âWe staged a coup and sold the idea to the doctors that we could make money playing progressive rock and roll.

âWe had pretty decent numbers back in those days, but we really didnât care much about them,â Sorenson said. âMaking money wasnât the priority for us, although Iâm sure it was for the people who owned the station. We just wanted to play music and make radio.â

The station owners sold KFMG to a larger corporate entity, Stoner Broadcasting. FM radio wasnât as popular in those early days, as AM radio was still king for music, news, sports and agriculture. Sorenson and his team of DJs and producers banded together and decided to walk away when the corporate owners attempted to change KFMG into a Billboard Top 10 station.

âThat was not what KFMG was about,â Sorenson said. He and most of his team resigned on air.

This led to a new and even more unique project â a cable radio called KBLE 90.7 FM TV4. Sorenson installed the cable radio station in the top floor of his house, and it ran from 1975 through 1992. This was the era of early cable television, and radio was included in this advance in technology. For an additional $1 premium, subscribers could receive additional cable-based radio stations. The station would not only play on the FM dial but also in the background audio for the âwant adsâ and program guide channels. Much like the current incarnation of KFMG, all the producers and DJs were volunteers. They would walk through the front door of Sorensonâs house and up the stairs to produce their shows.

KBLE 90.7 FM stayed on the air until the 1990s version of KFMG started broadcasting. Before there was Lazer 103.3 FM, there was KFMG 103.3 FM. That version of KFMG happened because the FCC allocated a new license to Des Moines, and 18 entities applied for the license, including Sorenson (whose corporation was known as Intergalactic Communications). The license was eventually awarded to Richard Eichner.

During this process, Sorenson reunited with a former KFMG announcer who was living in Chicago and had parents who were real estate developers in the suburbs. KDMG 103.3 FMâs license came up for sale, and the two of them were able to purchase the license. KFMG was reborn as a 100,000-watt station that could be heard for miles. It was the beginning of the era of Adult Album Alternative stations (AAA), a kinder, gentler form of rock and roll. In 1996, much like the previous incarnation of KFMG, the station was sold to another large corporation, Saga Communications, and became what we now know as Lazer 103.3 FM.

The low-power, nonprofit community radio station era of KFMG that is now broadcasting at 98.9 FM started in 2007. The telecommunication act of 1995 removed many ownership restrictions and caused a massive consolidation in the industry, significantly affecting the âlocalâ emphasis of radio. To help compensate, the FCC added a number of low-power frequencies in different markets, where they would be just far enough to not interfere with other stationsâ frequencies. KFMG was located at the top of the Hotel Fort Des Moines and continued as a AAA station but also offered programs that promoted the cultural happenings in the city. KFMG now operates from studios and offices in what Sorenson calls the âcultural incubatorâ at Main Frame Studios.

Even with all the musical and cultural shifts in this market, Sorenson was the one thing that stayed consistent for KFMG. One of his favorite moments in radio history that demonstrates the dedication that KFMG has had for the community was from the flood of 1993 when the stationâs DJs and producers had to park on Court Avenue and ride a canoe to the studios that were a block south. A short transcript of the broadcast tells the story and the mood.

Mark Vos: âThe water is rising, very high at the KFMG studios. We are under siege! How high is the water, Ron?â

Ron Sorenson: âOh, I think we are looking 18 or 20 inches at the last measurement, and it continues to go up.â

Mark Vos: âLadies and gentlemen, there are radio stations all over the land, all across this great country of ours who are broadcasting this evening from a nice, comfortable, dry, warm, completely operational, air conditioned, with more than one working light bulb studios. However, the three of us are locked in at 108 Third St. downtown Court Avenue, and water is lapping at the shores of Lake KFMGâ¦â ♦