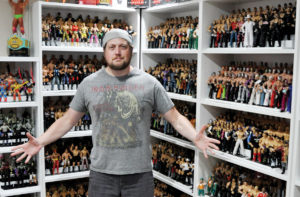 âThis is the worst Christmas ever,â Kyle Peterson remembers thinking. The crushed 7-year-old awoke to find next to no presents waiting for him.

âThere were like two GI Joe guys under the tree for me,â he says. âMy sister had a bunch of presents, but Iâm like, âThis is all?…I was bad this year. I got in trouble at school…I guess Santa is taking it out on me.â â

But the downtrodden youngsterâs world changed when he uncovered the present he never dreamed he would get: a GI Joe aircraft carrier.

âMy dad pulled a good prank on me,â he laughs. âHeâd put it together overnight. My all-time favorite toy ever. I still have it.â

The 7-foot monstrosity is a sight to behold, but it is a drop in the ocean compared to the treasures Peterson has accumulated since. His home office is loaded with Ninja Turtles, Star Wars toys and several hundred action figures lining the floor-to-ceiling shelving.

âBut this is nothing compared to the basement,â he assures. âThe basement is usually what makes people say, âHoly cow!â â

Thatâs where the bulk of his world-renowned pro wrestling action-figure collection is stored.

The jaw-dropping assortment regularly overwhelms onlookers, and recently it has attracted a wider audience.

âIt takes 30,000 followers to get paid by YouTube,â he explains, adding that if someone offers quality content, it usually takes a couple of years to accomplish. âI did it in less than a month.â

Peterson now does daily videos to entertain his audience at www.youtube.com/c/KylePeterson1980/videos.

âI do it because I actually like it,â he says. âAlso, itâs nice to hear people and get help finding figures.â

The family man has also enlisted his wife and two daughters to help him hunt.

Peterson custom-built the basement showroom himself and lined the walls with rows of shelving.

Petersonâs collecting obsession began with the original He-Man, next came Star Wars, X-Men toys and then wrestling action figures, Transformers, GI Joe, Ghostbusters, cartoon characters… Currently, Peterson is assembling a line of expensive and rare Hasbro WWE action figures from the 1980s. Andre The Giant and a wrestler called the Warlord are absent for now. Jake the Snake Roberts is also missing, but Hacksaw Jim Duggan will be shipped soon.

âTheyâre very hard to get in really good condition,â he says. âKids would throw them across the playground, and they were rubber and donât hold paint well.â

Most of these Hasbro figures he had as a kid, but he sold most of his collection to buy a Jeep before going to college in 1999. The calculation made sense at the time, but…

âProbably one of the biggest regrets of my life easily,â he says.

âIt just hit me,â he remembers. âI said, âI got to do it. I got to get that piece of my childhood back.â Thatâs why a lot of people collect this kind of stuff.â ♦