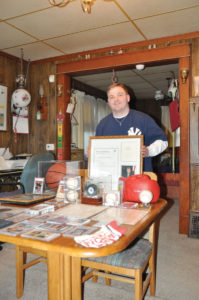 Adam Moraine began collecting sports memorabilia as an 8-year-old with his grandpa.
Photo by Jeff Pitts

Mr. Harry Pittman, Jr. knew beans about baseball cards, but the bubblegum card collecting craze was peaking in 1988, and his 8-year-old grandson, Adam Moraine, needed a hobby. As such, along with his wife, Alberta, Pittman and his grandson began a grand bonding endeavor, hunting for gems at card shows, collectible shops, flea markets and mall autograph signings.

Three decades later, Moraine is 39 and has his sights on making Gramps proud.

âTo amass one of the finest privately owned sports, historical and Hollywood celebrity/entertainment memorabilia collections in the entire state of Iowa,â he says. âUltimately consigning my entire collection to the major auction block when I become a 50-year collector in 2038.â
He has 19 years to go.

That list also includes Ty Cobb, the man Moraine believes is the best baseball player of all time.

âHands down,â he says. âNo one played the game as hard nosed or as gritty or as rough as Cobb. He was the epitome of a ballplayer.â

Cobbâs T206 tobacco card â printed between the years of 1909-1911 â is one of The Moraine Collectionâs crown jewels.

Modern-day stars are also in Moraineâs possession, as he actively works to assess who will be in the next wave of vintage.

Who else is unwelcome within The Moraine Collection?

âJust Bryce Harper,â he says while shaking his head.

The Moraine Collection originally consisted of only baseball cards and autographs. But after Grandpa Pittman passed away in 2001, Moraine sought some advice on how to collect in the future.

Taking the advice, Moraine quickly expanded by procuring autographs from Hollywood stars, athletic memorabilia of all kinds, and even items from presidents and historical figures.

Now Moraine has his sights set on an exit strategy. In 1999, a 50-year collector named Barry Halper, a man who had amassed memorabilia for half a century, auctioned off his collection through Sothebyâs Auction House, and the results were staggering. Halper fetched nearly $22 million during a weeklong auction, setting a record for sports memorabilia.

Moraine has never sold anything from his collection, but 19 years from now he plans to mimic Halper, and sell it all on his 50th anniversary of collecting. He will be 58.

âThatâs what Iâm going to do,â he smiles. âIâm going to be a 50-year collector, consign my collection to Heritage Auctions in Dallas, Texas, and retire a very wealthy man. Thatâs my plan.â ♦

The Moraine Collection is kept in a vault at an undisclosed location. The following list is a small sampling of the treasures that the vault contains.

HISTORICAL HIGHLIGHTS
A document with Arabic writing and signed by Saddam Hussein.
A note on congregational stationary signed by Mother Teresa.
A clipped signature from a canceled check from Judy Garland.
A typed letter signed by President Teddy Roosevelt.
A John F. Kennedy autograph that was signed while he was in office.