The staying power of a highly caffeinated comedy

âTriple Espressoâ is a regular part of central Iowaâs cultural landscape since its original, record-setting run in 2002. 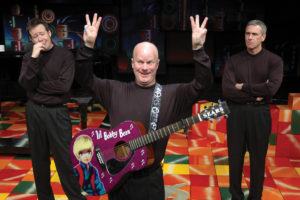 Having experienced this laugh-filled show many times, I canât recall a single scene where cups of caffeinated beverages took center stage. Like its namesake, however, âTriple Espressoâ is an experience to be savored many times. The consumer can continue enjoying this fine creative brew, discovering fresh nuances and delights with each subsequent serving. Itâs time to belly up to the comedy bar and let this talented trio of bombastic baristas serve up another round of this unbelievable blend.

âTriple Espressoâ is a regular part of central Iowaâs cultural landscape since its original, record-setting run in 2002. Iowa audiences couldnât get enough of this energizing elixir. The stories of fans returning many times were countless. Those who experienced the show were compelled to bring family, friends and coworkers to share the antics of three gifted performers delivering a superb story. This show masterfully blends comedy, music, magic, vaudeville, audience participation, and even a dash of poignancy to create a delectable evening of entertainment.

âItâs really fun for us, having done it for so many years, to hear from audience members who brought their children to one of our earliest shows. Now those children are married, bringing their children to the show,â reflects Bob Stromberg, who, with Bill Arnold and Michael Pearce Donley, created âTriple Espresso.â âHonestly, that is so rewarding, knowing that folks can bring their kids, their moms and dads, and itâs appropriate for everybody. Itâs a joy for us to be able to do what we have done for so long.â

Des Moines has savored every run of Triple Espresso since that 2002 show, originally planned for just a few weeks. It expanded into 451 performances from October of 2002 to February of 2004, making it the longest-running show in Iowa history. Iowans had a new stage love affair that has not waned since.

Patrick Albanese was one of that original Des Moines trio. This performing job was life-changing. As magician Buzz Maxwell, Albanese explained, âBy the time we hit the third or fourth extension of the show, the stage manager wanted to go home. A local stage manager was hired, and she completed that run. In 2004, I went to another city, the stage manager to L.A.â

That stage manager, Janet, became Janet Albanese, and they married and moved back to Des Moines in 2008.
Another original cast member, John Bush, aka Bobby Bean, became the beloved goofball to audiences. His facile face contorts into a myriad of masks, and his physical comedy and delivery cause waves of laughter throughout the show. He, too, made Des Moines his home town, also finding the love of his life here and getting married.

âTheater is a tough, tough business, and thereâs a saying about theater: You canât make a living at theater, but you can make a killing,â Stromberg shared. âWalt Disney responded to someone once who told him that he made movies to make a lot of money. Disney corrected him by saying, âNo, no, no â I make money so that I can make movies.â With âTriple Espresso,â a lot of money has been âmadeâ but, really, it was made so that we could continue doing âTriple Espressoâ all over the world. For that, we are very grateful. Thatâs what we do.â