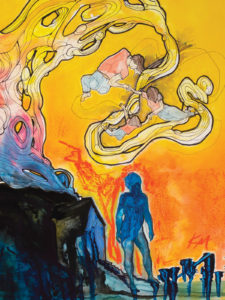 This is the artwork for âFun Home,â by regional, award-winning artist, Katelyn McBurney. She will be creating the artwork for all of Iowa Stage Theatre Companyâs 2018-2019 shows (except âMacBethâ).

Itâs challenging to find new themes when it comes to creating a Broadway musical. âFun Homeâ achieves that status, delivering a breathtaking experience based on Alison Bechdelâs best-selling graphic novel, brilliantly adapted by Lisa Kron and Jeanine Tesori. Winner of five 2015 Tony Awards, this new musical made a national tour stop at Des Moines Performing Arts last spring. âFun Homeâ now returns to central Iowa thanks to Iowa Stage Theatre Company and is sure to keep audiences talking well beyond the final curtain.

âThe story line is episodic, so the scenes that we see as the show progresses are not in chronological order,â explains the director, the talented Katy Merriman, a two-time Cloris Awards winner. âWe get to see the story unfold as memories that Alison (played by Rae Fehring) recalls, and sometimes those are of her childhood (Small Alison scenes, played by Amara Feitelson) and of her adolescence (Medium Alison scenes, played by Poni Lejukole). Itâs very exciting to see one character played by three people like this. You donât usually get to see what an adult character was like in their college years and childhood. I think the storyline also does a great job of balancing very intense and difficult topics with the joys of youth and family life. It is always wonderful and difficult and painful to deal with family and the people we love, and this story shows that in a really unique way.â

It is this scriptâs ability to portray these three different ages of the same character that adds to the sweeping uniqueness of its story. Add a compelling array of others to create a family that is recognizable in its dysfunction as well as its other interactions, and âFun Homeâ unfolds through the rare perspective of an adult Alison randomly pulling memories from different times while witnessing her parents during their early family years.

âFun Homeâ also was nominated for nine Lucille Lortel Awards (winning three, including Outstanding Musical), two Obie Awards and eight Drama Desk Awards. Critics have hailed this musical as âNew! Fresh! Original! We toss those kudos around a lot in this business, but âFun Homeâ really earns the praise.â (Variety)

In a show filled with excellent regional talent, âFun Homeâ will be Katy Merrimanâs directorial debut with Iowa Stage. She is a proven consummate performer and first directed a show with her critically acclaimed musical Elephant and Piggieâs âWe Are in a Show!â at the Des Moines Playhouse. She now tackles the directorial challenges that âFun Homeâ offers.

âI do appreciate having acting experience because it helps me figure out how best to communicate an idea to an actor,â says Merriman. âI think communicating an idea clearly is one of the most important hints for me to be able to do, and having some experience being on the other side of that is definitely helpful.â

The results of this latest recipe for creative success begins Sept. 28 and runs through Oct. 14 in the Kum & Go Theater at the Des Moines Social Club. Iowa Stage has established a solid reputation for selecting great scripts then doing a masterful job in producing them into engaging theatrical experiences. This show takes a bold step in a new direction by blending seasoned actors with younger actors in a script that is demanding for the production team yet rewarding for audiences. Details may be found at www.iowastage.org.

Construction work continues in earnest as the Des Moines Playhouse anticipates its complete renovation to coincide with its season-opening âBilly Elliot The Musicalâ beginning Oct. 5. Ankeny Community Theatre begins an ambitious 39th Season with the drama based on Mary Shelleyâs book, âFrankenstein,â on Oct. 5. ♦