A summer of song and dance 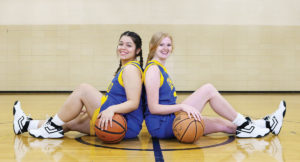 What do a Greek island, a high school and an archaic girls basketball game share? They are the settings for musicals, those magical, out-of-reality performing arts works where actors spontaneously burst into song and dance. Over the next several weeks, beat the summer heat with a little indoor retreat through some theatrical escapism.

Des Moines Playhouse hits the road to perform in West Des Moines Valley High Schoolâs Staplin Performing Arts Center due to construction on its performing hall. The beat goes on with the pop culture sensation, âMamma Mia!,â featuring the works of ABBA. Perhaps one of the best escapist musicals ever, this show pulses with an irresistible energy. Playhouse Executive Director David Kilpatrick directs this show, offering his insights.

âWhen first experiencing âMamma Mia,â I considered it an ABBA concert hidden by alternate costumes,â confesses Kilpatrick. âHowever, it is a sweet story about a daughter and mother who together are remembering their past or dreaming of their future.â

Fans of this show will find special nuances in this production.

âOne of the common perceptions about the play is that the dads donât do much and donât need to even sing.â Kilpatrick continues, âI (fixed) that by having the dads be singers.â

Within the theatrical heritage of âHamilton,â âNext to Normalâ and âAvenue Q,â âBring it Onâ is an explosive musical that delves into the world of competitive cheerleading and fierce rivalries. Des Moines Young Artistsâ Theatre (DMYAT) has built a solid reputation on delivering shows with broad appeal.

Director and Choreographer Megan Helmers describes this showâs lessons as a ââ¦theme of treating others with respect, and it is seen across several plot lines.â

She continues describing the showâs success, ââ¦the show is so much fun, it never feels preachy or inauthentic. This musical is just a blast beginning to end.

âThis show demands a lot from its cast. Not only do they have to be able to sing and act; weâre also asking them to tell the story through a set of diverse movement styles ranging from hip hop all the way to competitive cheerleading. Weâve spent several of our early rehearsals in âcheer camp.â â

The title says it all in anticipation for this dynamic show â bring it on.

This year marks several memorable anniversaries including the 25th since the last six-on-six girls basketball game, 50th since the titanic championship title clash of Denise Longâs Union-Whitten team against Jeanette Olsenâs Everly, and 99th since the first Iowa girlsâ basketball game was played. Iowaâs musical theatre savant Robert John Ford has distilled this rich legacy into a power-packed musical filled with plenty of action, memories, comedy, drama and great music. And, of course, there is plenty of dribble-dribble-pass.

Fordâs ability to draw a rich story from this history is captivating. His musical skills have been praised â âCaucus! The Musicalâ and âUtopia.â âSix-on-Sixâ is sure to score as well.

Des Moines Performing Arts offers two special workshops. July 10-13, a musical theatre dance intensive workshop by cast members of âHamilton,â and a Broadway summer intensive led by Broadway professionals July 16-21. Both workshops are open to students in ninth through 12th grade, or who are preparing to enter their first year of college. https://desmoinesperformingarts.org/events/?s=all&f=all&v=grid ♦