6 tips for energy savings at your business 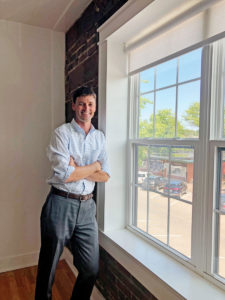 Scott Cutler, the owner of Cutler Development, stands next to new energy efficient windows that were used to replace old windows in a 108-year-old building he helped rehabilitate in Valley Junction. Photo by Melissa Walker

U.S. small-business owners spend more than $60 billion annually on energy costs, which are one of the top three business expenses for one-third of them.

The Environmental Protection Agencyâs ENERGY STAR program estimates that, with some efficiency upgrades and changes in behaviors, some small businesses could reduce their energy costs by between 10 percent and 30
percent.

That savings became a reality for Bryce Smith, the owner of Adel Family Fun Center, who in 2016 contacted
MidAmerican Energy Co. after his energy bill topped out at about $1,600 a month.

âI felt like I was paying an astronomically high amount for our energy bill,â he says of his building, built in 1960.

For business owners such as Smith, there is a variety of options they can explore to find savings with energy costs.

Contact the utility company to conduct an energy audit of the business or building. MidAmerican Energy, which services central Iowa, offers audits at no additional cost.

The utility has numerous energy efficiency programs for small-business owners with existing buildings or with newer commercial construction.

âWeâre trying to find the best solution for them for whatever issues theyâre having,â says Tina Yoder, MidAmerican Energyâs director of energy efficiency.

New to MidAmerican Energyâs offerings is a program in which qualified lighting and HVAC (heating, ventilating and air conditioning) partners will work with MidAmerican customers to complete an energy assessment, make recommendations for energy efficiencies, explain potential rebates, and then complete the project, if approved, and help submit the appropriate paperwork for the rebate. The business owners will have the choice of having the rebate mailed directly to them or given to the contracting partners to offset the cost of the equipment and work.
Any business owner who has had a higher than normal energy bill, or one that has spiked, should call MidAmerican and inquire about an audit, Yoder says. 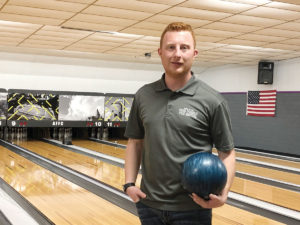 Bryce Smith, the owner of Adel Family Fun Center, installed LED lighting, like that above him, and two new furnaces after an energy audit in 2016 suggested potential savings in those areas. Photo by Melissa Walker

Most customers call because of that, or lighting concerns or because their HVAC system is aging. She encourages business owners to call before they replace a system so they can become better educated about their options and what would be best for their building.

A MidAmerican Energy representative conducted an audit at Smithâs business to examine the age and condition of his appliances, heating and cooling units, the amount of heat leaving the building â it was wintertime â and to check the insulation and light fixtures, among other things.

At the time, Smithâs business was heated with two 15-year-old furnaces and lit from old tube fluorescent lighting that cast a yellow glow throughout the bowling alley.

The representative gave him a list of recommended changes and what rebates he would receive for implementing them. In the end, Smith changed his lighting to LED bulbs and fixtures, replaced his furnaces and installed energy-saving outlets. His energy bill reduced to a maximum of $1,000 in peak months, which is about 7 percent of his overall expenses.

Besides the monetary savings, Smith says it has made him more conscious about how much energy his building uses.

According to ENERGY STAR, a government-backed program that helps businesses protect the environment with energy efficiency, many changes business owners make also add comfort to the customer. That happened, Smith says, with his new heating and cooling systems and the LED lighting, which is whiter, cleaner and brighter than the yellow haze that previously lit the bowling alley.

2. Start early in the process

MidAmerican Energy has a special program for new commercial construction projects built in its service territory. Any business owner who wants to take advantage of that program should contact the company early in the construction process.

âOur program is about working with the architects and the designers in the design stage,â Yoder says. âThey might want to use certain equipment thatâs not of the highest efficiency.â

MidAmerican will provide a rebate for buildings that are constructed more efficiently than the code requirements by 5 percent or greater. 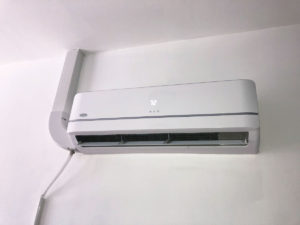 Scott Cutler went from window air conditioners to efficient wall-mounted units in each apartment in a building he rehabbed. Photo by Melissa Walker

Every customer will have an idea of what they expect their payback to be for installing more energy efficient equipment, but a utility expert can provide a better and more complete picture, Yoder says.

When a business or building owner wants a two year or less payback for common improvements such as lighting, he or she also needs to take into account any rebates they may receive.

On average, business owners can expect a two to seven-year payback depending on their initial investment. For larger, more complex projects, it might take 10 to 12 years; for others, it might be four or five, Yoder says.

âWeâre shooting for rebates that bring the investment down to about two to six years on a payback period,â she says.

MidAmerican Energy has a variety of programs and their requirements listed on its website: www.midamericanenergy.com.

Programs range from a curtailment program that gives financial incentives to commercial and industrial customers that reduce peak electrical demand; rebates for out-of-pocket costs for installing new energy-efficient heating and cooling systems; and Trees Please!, a program that provides windbreaks and shade trees to customers in cities served by MidAmerican Energy.

Scott Cutler, the owner of Cutler Development, has tried to integrate as many renewable practices as possible into the redevelopments heâs done.

One of those was the 108-year-old building at 224 Fifth St. in Valley Junction. Brickwork was exposed and original
hardwood floors were refinished, but the project also included an upgrade of all windows, plumbing and heating and cooling systems.

âThis is a more energy-efficient design and concept than when we started,â Cutler says.

His company and partners are now working with Willdan Energy, formerly the Weidt Group, a company with offices in Des Moines that helps clients optimize building energy performance and works directly with utilities such as MidAmerican Energy as its implementation contractor for the commercial new construction program.

Cutler says the company has taken Cutlerâs conceptual designs for projects and budgeted in renewable energy design options, as well as potential energy increases in the future.

âIt allows you to really quantify the financials around renewable design, which isnât always the driving factor,â he says.

The company is currently considering whether to add solar panels to some of its redevelopment projects â it has three other historic adaptive reuse projects under way in the Valley Junction area â to offset some of the energy costs in common areas such as lobbies and staircases, or to completely pay for all electricity costs and incorporate that amount into rent prices to pay for the costs of the panels themselves.

The issue, Cutler says, is that a higher rent, though it would include electricity costs, might turn off prospective renters.

âFor me, the risk is high,â he says. âWe would have to increase rent to pay for it, so the utility savings would go to rent instead. I donât know if the renter is educated enough to understand the difference.â

The company also is considering whether it could experience savings with the installation of a geothermal system, Cutler says.

âIâm trying to learn more to do better,â he says.

Cutler and his partners might be able to capitalize on the stateâs Solar Energy System Tax Credit, which runs through 2020. Applicants apply through the Iowa Department of Revenue. Currently, $5 million in credits are given each year. That number drops to about $1 million in 2020, according to the departmentâs website. In some cases, businesses have been able to receive up to $20,000 in credits.

While there was some cost for Smith, the bowling alley owner, with the purchase of the lights and heating system, he received a rebate of more than 50 percent for each light, 40 percent for his first furnace and 30 percent for his second, plus his monthly energy savings. Both MidAmerican Energy and the supplier provided rebates for the new items.

âThe savings is enough to start that next project,â Smith says, adding that he spent $12,000 to update his rooftop air conditioning so that it runs on a cycle rather than nonstop like his other units. He says he received about a 15 percent rebate on it. 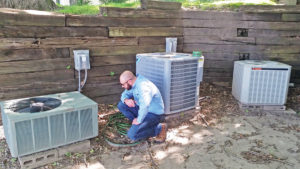 A MidAmerican Energy Co. employee conducts an energy audit for a business.

A lot of savings can be found from behavioral changes, according to ENERGY STAR.

For example, employees should turn off lights and equipment when not in use. Regularly changing or cleaning HVAC filters and installing a programmable thermostat can ensure systems are running efficiently and control the temperature at times when the building is unoccupied. ENERGY STAR recommends setting thermostats between 78 and 80 degrees during business hours and higher than 80 degrees during unoccupied hours during the summer. In the winter, the recommended ranges are 65 to 68 degrees, and 60 to 65 degrees when the building is unoccupied.

â¢Limit direct sun through windows to prevent heat gain in the summer. Open blinds in the wintertime to allow heat in.
â¢Install lighting occupant sensors.
â¢Conduct regular maintenance on HVAC equipment.
â¢Plant trees outside of the business to shade it in the summertime and shelter it during the winter.
â¢Use fans to move air and control the temperature.
â¢Seal door and window air leaks with weather stripping and caulking.
â¢Allow natural light in instead of using overhead lights.
â¢Avoid over-lighting. Not only does it waste energy and money, it can cause glare, eyestrain and headaches.
â¢Switch out incandescent and fluorescent bulbs for LEDs, which use 80 percent less energy and last 25 times longer.
â¢Place computers into low-power mode after a set time of inactivity.
â¢Use laptop computers, which pull 80 percent less energy than desktop computers.
â¢Prevent phantom energy waste by unplugging devices or plugging them into a power strip and shutting it off at the end of the night. Even devices that are turned off will still pull some power.
â¢Invest in rechargeable batteries for devices that require batteries.
â¢Print only when necessary and double-sided when possible.
â¢Maintain refrigerators for large systems; clean refrigerator coils twice a year and replace door gaskets.
â¢Install water-saving faucets and urinals.
â¢Insulate the hot water heater and set the temperature to a range between 110 and 120 degrees. If possible, upgrade to a more efficient water heater. ♦