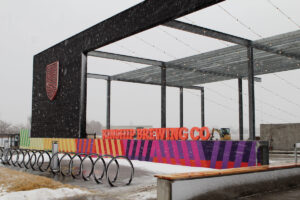 Imagine a place where you can bring your dog, park your bicycle, eat fresh food, view original artwork, enjoy live music and drink craft beers, all in one location. Look no further than the Kinship Brewing Company in Waukee.

Kinship opened up New Yearâs Day of this year in a 6-acre lot just off the Raccoon River Valley Trail and a quarter-mile from Hickman Road.

The breweryâs owner, Zach Dobeck, hails from Atlanta, Georgia, but his wife, Ann, is originally from Waukee. Three-and-a-half years ago, he set a goal to open not just a brewery but also a place for people to connect in the community.

The road to the brewery winds past the new Waukee Northwest High School on land formerly used for farming. Color abounds throughout the brewery. A colorful mural painted by Tina Ehrlich greets visitors. A casual seating area offers up a âpaint by numbersâ wall mural by Curtis Poortinga. Behind glass windows are the barrels and tall silver tanks of the brewery. A tasting room near the barrels includes a private area and huge sliding doors.

Enter the main taproom and youâre greeted by a 20-foot by 90-foot mural of a tiger baring its teeth, along with whimsical creatures surrounding it. Artist Greg Mike spray-painted the artwork, as his iconic paintings are popular in Atlanta. Dobeck chose Mike, as they both grew up in the South.

âI love his characters,â he says. âI commissioned his work by being persistent.â

Since this is a bar feature, letâs get to the beer. So far theyâve perfected six beers, adding more as they go along. A flight of four beers for $10 is a popular choice to sample IPAs, such as the Dear Annie, named after Dobeckâs wife. Or try the Mpany, a black IPA. Mpany is named after the signage on the outside that was supposed to read Kinship Brewing Company. Instead, the sign was delivered in pieces, dropping off the âmpanyâ, thus a quirky way to name a beer.

The beer is âgoing back to the basics,â Dobeck says. âWeâre proud of traditional beer, but itâs more elegant and exceptional. We donât want to paint ourselves in a corner of offering only certain brews.â

Beer comes in a variety of different sized German style pint glasses, one representing a tall boy can. A few wines by the glass and cider are also available.

A half-acre dog park is a fenced-in area where dogs can go off leash while their owners are sipping brews. As the 800-square-foot kitchen is still under construction, a food truck from Knead Pi & Q offers appetizers and pizzas to bridge the gap.

An outdoor patio will eventually seat 150. Bikers from the Raccoon River Valley Trail can easily access the brewery. A grassy area will offer live music and events once constructed and the pandemic slows down.

Dobeck is grateful for the opportunity to build kinship among the community by providing entertainment.

âWeâre excited to be part of Waukeeâs growth,â he says. ♦