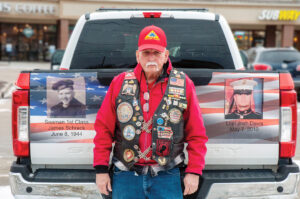 Jim Clark is the Iowa State Captain for the Patriot Guard Riders. He served 12 months in Vietnam from 1969-1970. Photo by Sofia Legaspi Dickens

For those who wish to join the Patriot Guard Riders (PGR), the only prerequisite is respect.

There are no membership dues, no monthly meetings, no background requirements. Only a desire to honor veterans, first responders and members of the military who were killed in action (KIA).

âWe were formed in 2005 to take on and show the families that when our KIAs were returned to the United States that their loss was not forgotten and to counter the protests that were going on,â said State Captain Jim Clark.

At a time when an infamous group from Kansas was traveling the country to picket at funerals, including military funerals, a band of Vietnam War veterans and motorcycle enthusiasts assembled to protect grieving families. 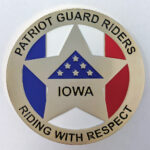 âOur motorcycles take pretty good care of their noise,â Clark said. âWe just rev them up and kind of shut them down.â

PGR members do their best to shield the family from seeing or hearing protestors at assignments they call âmissions.â At times, the whole town has gotten involved.

âWe had a town up in north central Iowa,â Clark recalled. âThey brought in some cattle trucks and parked the cattle trucks in front of [the protestors]. That was very interesting.â

Now, the PGR attends funerals for veterans and first responders, always at the invitation of families. Members stand in a flag line an hour prior to the service and often provide an escort to the burial site.

âMost of the time, we try to ride motorcycles,â Clark said, âbut in Iowa, thatâs a little bit problematic in the wintertime, so we use our vehicles.â 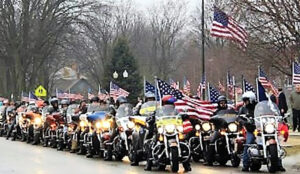 While they initially formed as a group of bikers, PGR membership accepts anyone, no matter what they drive. Regular vehicles â or âcages,â as bikers like to call them â are always welcome.

âI saw a newscast of Marine Lance Cpl. Josh Davis being returned to Iowa; he was killed in Afghanistan in 2010,â Clark said. âI heard the protestors who were going to be there at the service â and that was in Perry, Iowa. I said to myself, âThatâs not right, somebody should be doing something.â â

Through this, he discovered PGR. He described his first service as humbling and moving, emotions paralleled by anger at the protestors.

âAs a Patriot Guard member, you have to be overcome by the outpouring of love the family shows for you,â he said. âJust for somebody they donât know to come and be a part of their loss, itâs a tremendous thing â especially when itâs a young soldier or Marine or Air Force.â

Over the years, heâs become good friends with the Davis family.

While most PGR members take up missions closer to their home area, Clark travels across the state. Heâs now approaching his 1,200th mission in 13 years.

âFor me, itâs just a matter of showing respect for the families that have lost a loved one in the protection of our country. Itâs just the thing to do,â he said. âI understand that people work; they canât do everything, so they kind of have to pick and choose. But maybe, if youâre retired or you donât have a lot to, join the Patriot Guard. Itâs a good organization, great people.â

Those whoâd like to participate in a mission or request PGR presence at a funeral may visit www.iowapgr.org. The organization also accepts donations to cover the cost of flag replacements, plaques given to families, teddy bears for the children and challenge coins. ♦