Advocacy as a way of life 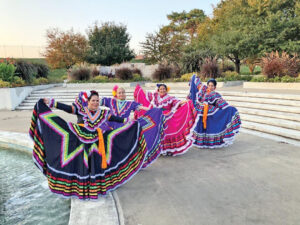 Isabel Martinez Santos serves as a bi-lingual Department of Justice representative and co-director of the legal clinic at the Iowa Coalition Against Domestic Violence.

But, she said, âI am more than my work.â

Her mother, fleeing violence and seeking safety and a better future, immigrated to the United States from Oaxaca, Mexico. Santos followed in 1995.

âI was sad. I was homesick. I craved the food,â said Santos, who has indigenous roots in the Zapotecs and Chatino. âI remember going to a regular restaurant and thinking, âWhere are the tortillas? Whereâs the salsa?â It was hard.â

The transition was made easier through community. While she encountered some people who refused to welcome her family, she also met those who did â with open arms. She resolved to be that welcoming person for others. 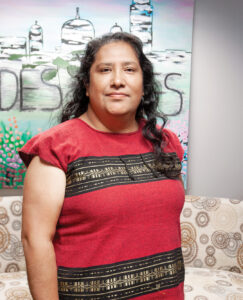 Santos immigrated to Iowa from Mexico in 1995 and now works with others who have done the same. Photo by Sofia Legaspi Dickens

âI just started working and volunteering,â Santos said. âMy eyes opened to so many things that give me passion and make me feel part of the community, make me feel like I have the voice and power to change things.â

As a survivor of violence herself, Santos started out volunteering with a community group of Latina women banding together around their experiences with domestic violence. Later, it became L.U.N.A. (Latinas Unidas Por Un Nuevo Amanecer), a nonprofit filling a need in the community for cultural-specific services and support.

After working in the victim services field for some time, Santos fulfilled a lifelong dream and completed her education. Already a mother with her own children, she earned her human services degrees from DMACC in 2012 and Grand View University in 2015.

Today, she tirelessly advocates for, mentors and empowers domestic violence survivors and those within the immigrant community.

âMy mission as an advocate â as a human being â is to advocate for human rights, to be the loud voice of the most vulnerable,â she said. âIn this field, I found that I have the right and am able to provide a voice for those to be treated with respect, with dignity and with justice.â

For her passion, Santos has been honored as Iowan of the Week in the Congressional Record, received the DREAM Award from the National Network to End Domestic Violence, and will be recognized as a Passport to Prosperity Honoree at the Iowa International Centerâs annual gala on Oct. 7.

âIâm in a privileged position,â she said. âI feel embarrassed to be recognized for something that should be part of our everyday life â to do things for each other and for our community. Because, honestly, I see people in my community that do way more things than me, and it just so happens that they donât have the privilege that I have.â

Another effort of Santos â one she is excited to discuss â is a folklore dance troupe called Nuestra Danza Sin Fronteras, meaning âOur Dance without Borders.â It began in 2017 among a group of her coworkers as a form of self-care, a way to destress from the intensity of social work.

âThen I opened it to adult women that might have needs about just feeling good about themselves or might have suffered some trauma in their life, and, from there, it started to grow.â

With each performance, Santos said she saw patterns of depression and even physical ailments decrease in the groupâs dancers, while self-confidence grew.

âI started to notice how the brain connects with the body and how our women started to feel better about themselves,â she said.

The group performs at various events and locations throughout the state, from schools and libraries to the Latino Festival and Iowa State Capitol. They only accept donations for performances, create their own costumes and are on the lookout for a regular space for weekly practices. Santos emphasized that women of all cultural backgrounds are welcome to participate.

In her nearly 30 years since first coming to Iowa, Santos said she has seen the Des Moines metro become âmega-diverse.â From cuisine, traditions and other cultural riches, immigrant Americans are everywhere.

âWe give life and flavor to this community,â Santos said, adding: âI just want people to know that we immigrants are here. I would like people to know that they should know their neighbor, and that not every people is bad. We have so much to offer and so much that we can do working together.â ♦