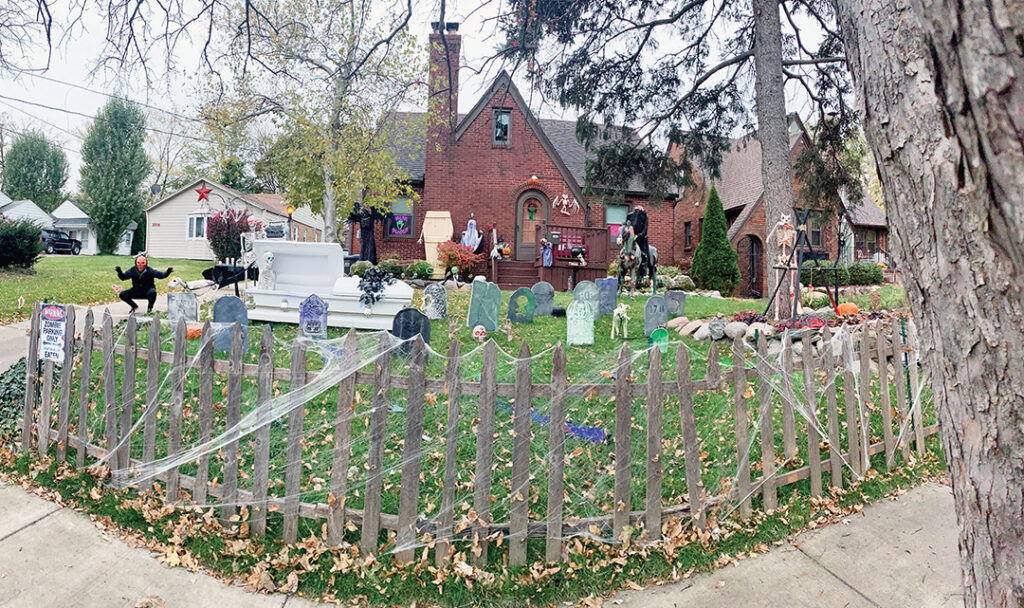 The spooky scene in front of Shannon Soleâs home gets the attention of trick-or-treaters, but the candy sometimes comes at the cost of a scream, courtesy of her husband, Joe Moser. Photos submited

Some kind of crazy crime scene grabs the attention of the October passersby in front of the brick home in Beaverdale. Hacked-off body parts are strewn alongside many other signs of spookiness. A casket is situated near a coffin, and both are arranged near a life-sized werewolf. This moon-howling beast serves to accentuate a different oversized monstrosity… a menacing horse ridden by a decapitated man. The horseman having lost his head probably explains why he parked his stead in this particular lawn, even though a plainly-posted sign states: âWarning! Zombie parking only. Violators will be eaten.â

Maybe the skull sitting on the ground is his, maybe not, but either way, neither the head nor the horseman appear overly concerned about paying the rather excessive parking violation. 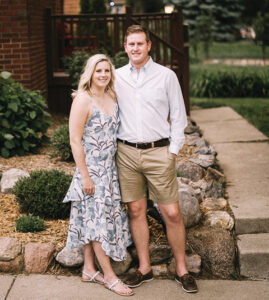 Many other creepy details also adorn the inside and the outside of Shannon Sole and Joe Moserâs home. Now that Octoberâs autumn chill has set in, neighborhood pedestrians frequently crane their necks to ogle.

The whole exhibition started simply enough. In the beginning, Soleâs Halloween decorating consisted of a small, makeshift graveyard with only a few tombstones.

The spectacle may be driven by Soleâs passion, but, truth be told, Moser contributes plenty. His handyman skills are instrumental, and Sole says that without his help, much of the construction would not be possible.

âHeâs the muscles,â she laughs.

Sole is originally from Cedar Rapids, and her husband, Moser, was raised in Sioux City, but the couple considers Des Moines home. They are both attorneys and moved to their current residence in 2015.

Prior to living in central Iowa, Sole didnât know of the Beggars Night tradition. Now she enjoys laughing at the jokes and seeing kids in costumes while sharing a good scare with anyone who is willing. Together, this husband-and-wife duo teams up for that purpose, too. While the wife doles out candy to unsuspecting trick-or-treaters, the husband seizes the opportunity to sneak around to the backside of his distracted prey. Then, at precisely the right instant, he pops out unannounced to accomplish shrieks of terror. Moser has also been known to play dead in one of the coffins while dressed as a skeleton, and this technique serves to gain the requisite surprise-factor to elicit the biggest screams.

âNot to the kids that are too little,â she assures.

Beaverdale is famous for collectively decorating for Christmas. Now, many of Soleâs neighbors have followed her Halloween-decorating lead, and she hopes more will continue to join.

âThere seems to be a lot of enthusiasm,â she says.

Still, just like everything else in 2020, last yearâs Halloween activities were slowed by COVID-19 precautions, but Sole made the most of it.

âWe ended up doing a candy shoot,â she says, describing a giant PVC makeshift candy delivering mechanism that slides candy into the greedy hands of little ghosts, goblins and various other pretend creeps, while still allowing for social distancing. âWeâll probably do that again.â

Sole also plans to unveil a zombie wedding theme this year. Sheâll be adding a wedding arch along with a gruesome twosome looking for love in all the starving parking spaces.

âWe get a lot of traffic on Beggars Night,â she says. âItâs a really fun night.â ♦