That girl is on fire! 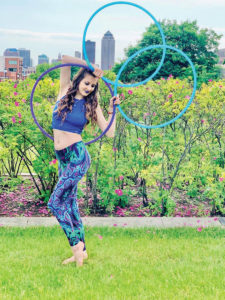 Jessica Short uses her hula hoop to do flow artistry. She says locals of all ages and types enjoy the practice because âmovement is for everybody.â Photo submitted

If youâre in northwest Des Moines and somewhere near Beaverdale or Drake University, and if you happen to see a flaming hula hoop spinning around a performer who is being cheered on by her neighbors while they snap photos, then you will have met Jessica Short â also known as the Holisitic Hooper on Facebook. The 27-year-oldâs passion for hooping ignited seven years ago at a house party.

âA girl had a light-up hoop,â she remembers. âI instantly fell in love.â

That love led to daily practicing, usually for two hours or more during her first year. The hooperâs confidence grew and so did her muscles, stamina and endurance.

âIâm a severe asthmatic with one lung,â she says. âI canât really do a whole lot of cardio and heavy exertion things, but hooping has been one of those exercises where I can move it to different parts of my body when I start to tire out. It has brought me a lot of peace and centering. Itâs a form of mood-moving meditation for me. Meditation is a very big part of my life.â

A growing number of flow artists are thriving in central Iowa.

âFlow art is its own movement community,â says Short. âYouâre using props and object manipulation with movement. Literally, you learn tricks, but itâs flowing in the moment. I donât really choreograph, itâs all just… go with the flow.â

Local hoopers range from ages 4 to 90, according to Short, and both genders enjoy the practice.

âYou can do more than you think,â she assures. âIt takes just putting yourself out there and trying.â

Short also makes custom-made hula hoops to sell, and she brings the extras along with her to performances so others can hoop, too. People can be easily discouraged if they donât have a proper hoop in their hands. Size matters, according to Short, the bigger the hoop, the slower it will rotate, and the slower the rotation, the more control a person has. The tubeâs material makeup is also important.

âThe higher density, the more of a beating it can take,â she explains. âMost childrenâs hoops are made with only a thin layer of plastic that tends to bend and break easily.â

Shortâs fire-hooping shows happen when she feels like entertaining. After attaching wicks to the hoopâs exterior, it is her time to shine and let the sparks fly.

âThe neighbors usually will hear the music starting and come out, or sometimes Iâll go running up the street and tell them, âHey, Iâm about to light up or about to flow.â â she says. âThey usually will stay across the street if itâs fire. If itâs an LED hoop or plastic, then theyâll come nearer. They usually have their cameras out, and theyâre cheering.â

Playing with fire demands a limited arsenal of tricks, and the show can only last as long as the wicks continue to burn, usually 4-5 minutes, but itâs spectacular to see.

âItâs very beautiful to watch,â she says. âFor me, itâs very ceremonial. Itâs a way for me to release, and I love fire. So I use it as also a form of meditation. I most commonly do it for the full moon and the new moon.â ♦