Thursday, May 26, 2022
Join our email blast
Your Neighbors 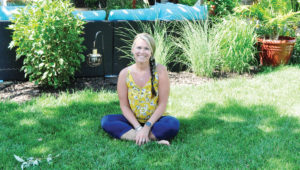 As she pulled and pushed and worked the lawnmower through the rougher-than-usual grass, Johanna Hayes felt her chest tighten and her heart race. She should have been hot, but instead she felt a cold sweat.

âI must be really out of shape,â she scolded herself as she stopped to rest. But by any objective measure, the Altoona resident seemed to be in good health. She was 43 at the time, active, vibrant and weighed only 138 pounds.

After taking a break, Hayes eventually finished cutting the grass, but she continued feeling lousy and her heart kept racing at more than 100 beats per minute.

She was worried, but she went to bed anyway. In hindsight, Hayes says this could have killed her.

âI waited 24 hours before going to the hospital,â she remembers. âThat could have been deadly for me, as I could have gone into cardiac arrest.â

The next morning, Hayes felt like an elephant was sitting on her chest and could not breathe.

âI then knew something was really wrong and went to the hospital,â she says. âLooking back, I should have called 911.â

Initial EKG testing returned normal, but a little later her healthcare providers took one look at her bloodwork and sprang into action.

Spontaneous Coronary Artery Dissection, also known as SCAD, is an emergency condition occurring when the blood vessel tears in the heart, slowing or blocking blood flow. SCAD is still poorly understood, but it can cause a heart attack or other major health complications.

Upon hearing the words, âYou are having a heart attack,â Hayesâ mind raced in a million directions, but more than anything else she wanted what a mother of three wants.

âI want to talk to my kids,â she remembers saying.

But there was no time. Hayes was living a nightmare that was unthinkable just 24 hours before. She had never heard of SCAD, and not knowing the symptoms or how to respond almost cost her the rest of her life. Now, nearly a year later, Hayes is on the mend and helping to
alert others about the condition and what to look for.

SCAD can be, and often is, deadly. The typical SCAD victim is a relatively young woman who is otherwise healthy and does not have conventional heart-health high-risk factors. If you feel chest pain, rapid heartbeat, shortness of breath, sweating, extreme tiredness, nausea and dizziness, even if you are young, healthy and not otherwise at risk for heart ailments, you could be suffering from SCAD and should seek competent medical advice.

Hayes installed a pool in her backyard to replace the portion of lawn she was mowing when she initially felt her SCAD onset.

âI thank God every day that I am here and have a second chance,â she says. âI have to spread the word.â

Hayes lives with daily chest pains, medications and, at her doctorsâ insistence, less exercise. She has forever forsaken roller coasters, also at her doctorsâ behest, and lawnmowers are out of the question. But she can live with all of that. In fact, she is thrilled to live, period. There is a 20-30 percent chance of recurrence, but for now her health seems under control, so Hayes is working to spread SCAD awareness.

More information is needed, and research is ongoing, but 90 percent of the time the rare condition occurs in women, and most are between the ages 20-50. Hormones, emotional stress and extreme exertion are thought to be triggers.

âI have started a SCAD survivor page, and there are a couple other ladies here in Des Moines that I have met, and they have some amazing stories as well,â she says. âWe call each other âSCAD sistersâ and belong to a Facebook group that we all wish we were not in, but it has been a tremendous help to my recovery.” ♦