And other Terrace Hill treasures 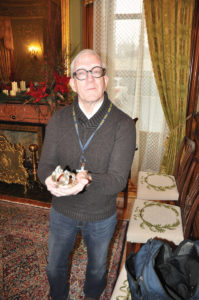 Patrick Phillips-Schrock is a retired teacher and local scholar. After his retirement, he found a new passion. So far, he has volunteered more than 500 hours at Terrace Hill updating the national historic landmark and living museumâs inventory.

âI taught for 45 years,â says Patrick Phillips-Schrock. As his official retirement date zoomed ever closer, he remembers wondering what was next. âThis was my last year, and I thought, âOh, what am I going to do now?â â

Des Moinesâ first millionaire is thought to have been B.F. Allen. Terrace Hill originally served as his private residence, and he is the person who contracted to have it constructed. But after the residenceâs completion in 1869, Allen experienced an abrupt financial collapse, which ultimately led to the lavish home being sold to F.M. Hubbell â one of our cityâs most prominent businessmen â for a fraction of its construction cost.

The stately manor sits on an 8-acre spread just south of Grand Avenue and overlooks the city. It functions as the official governorâs residence, and it is currently occupied by Iowa Governor Kim Reynolds and her husband, Kevin Reynolds. Terrace Hill is also on exhibit as a National Historic Landmark and a living museum. With its lavish Victorian style largely intact, the homeâs breathtaking magnificence has been maintained, as has its stained glass, deep-toned woodwork and a 7-foot Czechoslovakian chandelier, among other marvels.

Phillips-Schrock is a man of many interests. He enjoys international travel with his husband, learning new languages, accumulating scholarly knowledge and socializing and engaging in political discussion. Retirement or no retirement, heâd have no shortage of things to do. But, as his career came to a close and he wondered which endeavor would come next, he attended a Terrace Hill curatorial committee meeting, comprised of people with art expertise, or who were knowledgeable about furniture or architectural history or other similar subjects. An update to Terrace Hillâs inventory was needed, and volunteers were requested.

âI said, âWell, Iâll be happy to do the inventory,â thinking it would be a couple of days and we would go in and calculate four chairs and some sconces and that kind of thing,â he remembers.

Each and every item on site must be recorded and logged into an official inventory. Six months into the project, the retired teacher has logged more than 500 hours volunteering and has input more than 380 new records â each of them duly notarized and accounted for.

During the mansionâs service as a privately owned dwelling owned by some of the cityâs founding families, access to its grand extravagance was limited. But after the Hubbell family donated the property to the state in the 1970s, it was refurbished into a publicly accessible venue. Terrace Hill now welcomes an estimated 10,000 visitors annually, and Phillips-Schrock and others hope to grow that number. As such, his experiences inputting and tracking the mansionâs inventory has led the veteran educator and natural-born storyteller to yet another unpaid gig.

âThe dining room is my favorite room because thereâs so much there,â he says. âThatâs where all the high officials and the invited guests of the governor will congregate and talk and where they have food. There are fantastic items in the room that people kind of overlook.â
Amongst these relics is an unmatched set of 37 napkin rings. If you want to learn more about Terrace Hill, its history, its dining room, and those oddly placed 37 napkin rings, Phillips-Schrock will tell you all about it at Terrace Hill at 2 p.m. on Saturday, Feb. 29. ♦

Patrick Phillips-Schrock presents:
The Hidden Treasures of Terrace Hill
Terrace Hill, 2300 Grand Ave., Des Moines
2 p.m., Saturday, Feb. 29, in the Drawing Room along with tea and other tasty tidbits. Tickets to the event are $10. The speaker kindly donates his time, thus all proceeds go to benefit the gardens of Terrace Hill. Tickets are available at https://teaandtalktreasures.eventbrite.com.