Tuesday, May 24, 2022
Join our email blast
Your Neighbors

Waukee native returns home for a pair of country performances 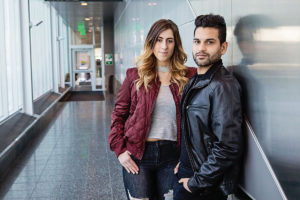 Faith Haroldson and Rob Donovan live in Nashville, performing country music under the moniker DF Donovan. Haroldson is originally from Waukee and met Donovan while he was playing hockey at Iowa State University. Photo submitted

To many younger Iowans, Nashville, Tennessee, might seem like an unreachable city of dreams, similar to New York City or Los Angeles. But these two Midwesterners are proving that, contrary to parts of the countryâs beliefs, talent does come from Iowa.

âI had no musical ability in my bones at all until I met Faith,â says Donovan, a St. Paul native. âThat night, we were driving around listening to Luke Bryan, and we started singing together, and weâre like âwow, this is fun.â â

âAbout a day after that, I went to the store and grabbed a guitar, and said, âIâm gonna learn this thing,â â Donovan says. âI played all day, all summer.â

âWe went back to school in September, and I kinda bombed my first midterm, and I was like, âI donât like this. Iâm gonna do music,â â Donovan says. âWithout telling my dad, I signed my waiver to leave school. I wanted to do this music thing without really knowing anything. That week, Faith came over, and we wrote a song called âTennessee Honey,â and there it is.â

In fact, Haroldson cited the recording experience as one of the greatest milestones in the duoâs brief career.

âI was like, âIâm at Brian Whiteâs house. The guy I listened to growing up, now Iâm in his house. This is awesome,â â she says.

Country has long been the most popular genre on radio, but in some circles there is still a stigma against it, and the duo is aware of that.

Donovan and Haroldson are bringing their emerging country act home by performing two pairs of shows this summer in Waukee. Iowans will have a chance to see them July 6-7 and Aug. 3-4 at Saints Pub and Patio in Waukee.

âFor me, at every show people are â¦ expecting one of two things: either Johnny Cash or that kind of âbro-country,â â says Donovan. âBut then we get up there and bring a unique sound to the table. I have such a high voice, and people donât expect that. Iâm actually the high singer, and Faith is the low harmony, and you really donât see that in a duo â¦ we kind of flipped the script there.â

Recently, the duo performed at Nashvilleâs CMA Fest, which saw many of countryâs biggest names (Carrie Underwood, Blake Shelton, Luke Bryan, etc.) perform on and near the music cityâs historic Music Row over the course of just a weekend.

âEveryone has the stigma of Iowa that itâs in the middle of nowhere, and they donât really know what comes out of Iowa, but anything can come from Iowa,â says Haroldson. âAs long as you work as hard as everybody else can, no matter where you come from, you can do whatever you want if you put your mind to it.â

As for the future, itâs hard to tell, but the duo is confident.

âGoing forward, we know our sound,â Haroldson says. âWeâre building our own sound. We know what people like … Itâs always for the fans.â ♦