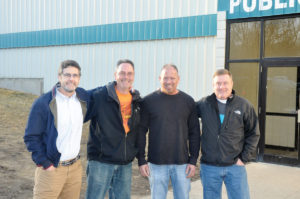 Mike Farrellâs third-place curling team at the time of the article consists of a group of friends and former neighbors. The teamâs season ended Feb. 23 in front of a packed house at the Metro Ice Sports Facility, which is located at 5100 N.W. 72nd St. in Urbandale. Pictured from left to right: Jerry Gruba, Chris Sonner, Steve Bacon and Mike Farrell. The Des Moines Curling Club is a member of The United States Curling Association (USCA). The club held its first league competitions in 2013 and was approved for membership in the USCA in 2014. For information about the club or to get involved next season, visit www.dmcurling.com.

By day, Mike Farrell is a commercial banker and a family man. But each Friday night during the winter season, he heads to the Metro Ice Sports Facility and throws stones with some former neighbors. Thatâs right, Farrell is now a curling player.

Prior to a couple of years ago, Farrellâs only experience with ice involved chilling a cold beverage or slipping in his driveway. When he first witnessed the sport on TV during the Olympics several years ago, he wasnât impressed.

âThat looks like something a bunch of fat old guys can do,â Farrell thought.

But curling is no longer relegated to something done by nobody-knows-who every fourth year at some exotic destination. Americans are learning to love curling. The sportâs popularity is on the rise. Nationally, the number of registered curling clubs has doubled since 2000. Hawaii has a club, and not to be outdone, so does Des Moines.
Each team consists of four players: the lead, the second, the third and a skip. Farrellâs three teammates are Jerry Gruba, Steve Bacon and Chris Sonner.

âWe are all old neighbors,â he says. âWe used to live close to each other. Weâve known each other a long time.â

The four rotate positions each week. Farrell says the team has good chemistry.

âFor a first season, we thought we did pretty well,â he says. âThere is a learning curve.â

Throwing the stones is similar to golfing.

âItâs almost like putting a golf ball,â he says. âYou have to play the break.â

Farrell says the league has been around for approximately five years, and it has grown each year. Most people are having fun, and the winner of the league moves on to the regional tournament.

âIt is competitive, and everyone is out there to learn and do well,â he says. âBut it is also about going out there and having fun. It is a good time.â

Farrellâs foursome enjoys its ice time and showed some promise. But he and his mates do lack experience.

âIâm almost positive none of us has any experience with ice sports in our lives. This is the first go around for all of us,â he says.

âIt isnât as easy as it looks,â he says. âYou are sliding down the ice trying to maintain balance along with your target line; itâs like putting a golf ball. As you let the stone go, it is all kinds of touch and feel trying to get the right speed. And if youâre a little light, you hope your teammates sweeping for you can create a little friction and help get it into the house where you want it.â

Thatâs what friends and former neighbors are for. That, and throwing stones, because these guys donât live in glass houses. ♦ 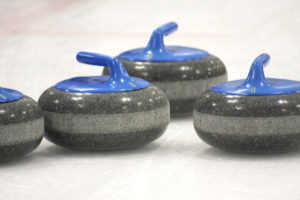 CURLING BASICS
The head (or captain) of the team is called the âskipâ and usually dictates the other playersâ shots. Each team takes turns âthrowingâ a stone, one player at a time. Each period of play is called an âend.â An end consists of each team member playing two stones. A game is made up of eight to 10 ends. For each stone closer to the center of the house than any of the opponentâs, a point is awarded. The team with the most points at the conclusion of the game is the winner.