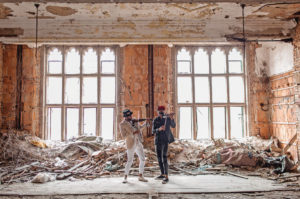 When twins Walter and Wagner first played the violin at age 11, they never imagined they would be filming a music video on a private jet 20 years later. They thought theyâd be in their home country of Brazil, playing classical music in an orchestra.

The twins, Walter and Wagner Caldas, known as the Brazilian Twins or B2wins, are a pop-rock-R&B duo based in Des Moines. Their slogan, âbeyond music,â is evident in their concerts and shows. The duo not only play violin, but they also play the ukulele while dancing, singing and entertaining the crowd.

âItâs all about the audience,â says Walter. âWe make it interactive; itâs all organic.â

Concertgoers who have never seen the B2wins are pleasantly surprised.

âWhen we get there, they know nothing,â says Wagner. âPeople behave differently at the start and completely different at the end of our concert. When they see us, three songs in itâs game over. They are now our fans.â

The twins began playing violin since their father was a violinmaker. They learned classical music, such as Mozart, but the young boys couldnât relate and preferred hip-hop and pop songs. Despite playing in an orchestra, they experimented playing top-40 music with their stringed instruments and became a phenomenon playing their violins at a young age.

âWe were poor black kids from the ghetto,â says Wagner. âWe got a lot of attention on the news. It was not heard of back then.â

The pair was interviewed on NPR News, and someone from Iowa heard them play and contacted them. The two settled in Cedar Falls in 2007 at the age of 22, attending the University of Northern Iowa. They spoke no English, which proved challenging.

When their careers slowly took off, they played mostly cover songs. Today, the group has recorded original music. With high-energy concerts, Walter says he loves what heâs doing.

âIâve always been a fan of Michael Jackson, and weâve always loved singing and dancing,â he says. âI never thought Iâd be singing â itâs a huge change for me â and to sing in English.â

Before the pandemic, they toured the U.S., performing 150 concerts last year.

âItâs a big highlight to travel as much as we do,â says Wagner. âComing to the U.S. is surreal. We know more of the U.S. than Brazil.â

This spring, due to the pandemic, theyâve reinvented their performances. One successful concert theyâve offered is cul-de-sac concerts. The group is invited to various central Iowa neighborhoods on a donation basis for private concerts.

âBelieve it or not, itâs amazing. The energy of the concerts, people sitting in their lawn chairs, asking questions, kids dancing, a warm night. The dynamic is nice. I love it,â says Wagner.

The pair says they stay true to their roots.

âMom always reminds us who is No. 1,â says Wagner. âWeâre always counting our blessings. We call our friends back home; theyâre excited for us.â

They appreciate getting to know their fans.

âWeâre not that big,â says Wagner. âWe get a chance to meet and carry on relationships with friends. Justin Bieber canât do that. Itâs awesome we can relate to our fans. â¦ Everywhere we go, we want to send a message of kindness and showing them a better world beyond music.â