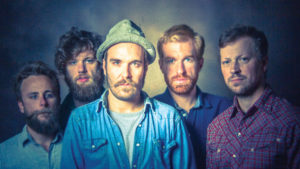 Red Wanting Blue, a heartland indie rock and roll band, returns to Woolyâs for a concert on Aug. 19. CITYVIEW recently caught up with lead singer and guitarist, Scott Terry.

The band formed 20 years ago in Ohio, where their midwestern roots developed. Terry says that, as a college student, they were eager to play with anyone.

âEarly on, when we got together, our expectations were low. Weâd say, âYou seem cool; letâs play in a band together.â We learned early on to be clear with what we were looking for and our goals for the band,â he says.

The bandâs name, RWB, came in the height of a presidential election, where controversy about red states versus blues states ensued. Yet, their name isnât political.

The band wanted to tour and promote its new album in the 2000s, but the record company sat on it, delaying its release.

âThey thought it sounded too much like the Wallflowers,â says Terry.

Instead, they embarked on a grassroots tour and started playing college towns. One of their most memorable stops was in Ames. The band finished up in Minneapolis, and on their way to Nebraska, they stopped at Diamond Jo Worth Casino in Northwood. A waitress recommended they stop at Peopleâs Music in Ames.

RWB told Peopleâs about their band and offered to play.

âThey laughed at us and told us they had open mic night,â Terry says. âWe gave them our CD and came back a few hours later.â

âWe ended up playing late. After hearing us, they asked us to come back the next night and they would pay us. That was a great moment and special for us.â

The bandâs 11th album, âThe Wanting,â hit No. 3 on the Billboard Heatseekerâs chart in 2018. This summer, they released âThe Peppermint Sessions,â a live album, recorded in a vintage studio in Youngstown, Ohio.

âWeâre self-reliant. We canât always count on a record label or manager to keep us together,â Terry says. âThe love of music keeps us together.â

One of their favorite venues was performing on a cruise ship, âThe Rock Boat,â during the last decade.

âIt was like the Superbowl of the year,â he says. âStaying true to our fans and playing live shows is really what gets us going.â

Due to the pandemic, the band canceled many shows, and itâs now important to connect with their fans through social media.

âSomeone was having a hard time, and we gave them a shout out. Weâre lucky we can do this live and show people, âHey, Iâm playing songs from my house.â Thatâs pretty remarkable,â he says. âIt used to be, the less you know the better, and musicians were more mysterious.â

As unsure as Terry is about what the pandemic holds for live music, he is still hoping to perform.

âItâs been the most interesting and strangest time in my career,â he says. âTell Des Moines to stay safe because weâre coming.â ♦