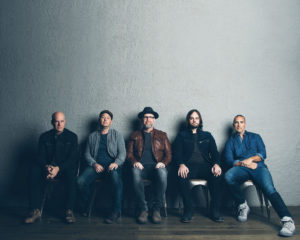 When MercyMe performs at Wells Fargo Arena in Des Moines on March 26, theyâll play from nine different albums. With 67 multiformat No. 1 hits, more than a dozen music awards and nominations, MercyMe is synonymous with Christian rock.

MercyMe bassist Nathan Cochran spoke to CITYVIEW and explains their success of staying together for 25 years.

âWe treat it like a family,â he says. âWeâve stuck together and supported each other along the way. Weâre still best friends with one another.â

The bandâs lyrics and music give encouragement and hope to their listeners. One triple-platinum song, âI Can Only Imagine,â talks about loss and reuniting others. Cochran explains why people react emotionally to their lyrics.

âA lot of people can relate to that,â he says. âEveryone understands about hurt, pain and loss. We write about our own life experiences and try to be honest. We donât hide our own lives.â

Providing honest music is ingrained in their Christian view.

âWe live our life how we treat others,â he says. âThe song is a catalyst to help them get through a tough time in their life. Itâs neat how our songs can live on. We always believe thereâs hope on the other side.â

Cochran says their lyrics are genuine and not sound bites. He explains, âThereâs folks who may fabricate their lyrics with an emotional pull. We donât do that.â

Having fun is also foremost in their concerts. The video for the song âHappy Danceâ features the band in white bowties, encouraging people to dance.

Christian music is not defined by genre; itâs defined by musical content. Christian rock can be hard-driving guitar or flowing ballads.

Whatever the music, the message remains the same â itâs centered on Christ.

âThereâs no rules. What consumes us is our relationship with Christ. As a Christian band, we share a world view of hope and treating others with kindness,â Cochran says.

Throughout the years, music has changed. At their first concert, they burned CDs to sell to fans. Today the recording process is easier.

âThereâs no barriers to getting music to our fans. Itâs an exciting time. Itâs cool thereâs no middleman between you and the fans anymore,â he says.

The band has received dozens of music accolades, and Cochran says they couldnât have done it without their lifelong fans â and their wivesâ approval.

âEvery time we get an award, we look at each other and say, âCool, we get to keep doing this.â Plus our wives say itâs OK, too,â he says.

Touring is tough. Six years ago, the band cut the number of shows they were doing in half. It helps with family obligations, which is a high priority.

Cochranâs most recent award was also the most special award heâs received so far.

âMy 4-year-old son wanted to give me a trophy for the best Jedi dad in the world,â he says. âThatâs all I needed.â ♦