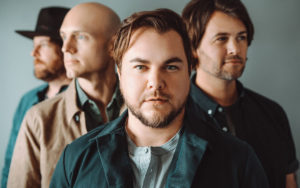 During their 20 years of performing, the Eli Young Band members have steadily churned out hit songs. With Billboard hits, Grammy nominations and a Country Music Song of the Year Award for âCrazy Girl,â the bandâs success in the country music arena remains strong.

CITYVIEW recently spoke to the bandâs cofounder, Mike Eli, before their upcoming concert on Feb. 15, following the Iowa Wild hockey game at the Wells Fargo Arena.

âThe song feels appropriate as to where we are in our career,â he says. âWe feel like weâre still breaking things in.â

He says the song is a positive one, which reflects their recent life-changing roles, in which band members are more mature and raising their own kids.

âSongs like this, with positivity, make you feel good,â he says. âNow that weâre parents, we want to teach our kids the right lessons. Itâs cool for a song to do that.â

The Eli Young Band frequently entertains military troops. Eli says itâs important for the band to say thanks to the military for their service to the country.

âWe all grew up with family members in the service and know itâs not an easy path to take,â he says. âAt the end of the day, no matter what politics say, these men and women have chosen this. Any taste of home for the troops can bring up morale, and we try to do it every chance we get.â

Dedication to the military is evident in their 2018 hit, âLove Ainât.â For the songâs music video, they feature a true love story of quadruple amputee and Cedar Falls native Taylor Morris.

The video outlines Taylorâs life when he returned from service with near-death permanent injuries. His girlfriend stood by him throughout the ordeal.

âWhen men and women over there serve and when they come home, the battle isnât over,â he says. âWith âLove Ainât,â we thought of the veterans and feature the true story of Taylor Morrisâ life. Itâs an incredible love story about what love is and what it ainât.â

In addition to Eli, other band members include Jon Jones, James Young and Chris Thompson. The band formed while in college, and theyâve stayed together by putting their friendship first.

âSome musicians are motivated by money,â he says. âWe put that aside. We actually care about each other. Without each other, there is nothing.â

Eli cites a strong work ethic and considers music a job, not a hobby. Although touring is tough, they find balance.

âIn this industry, itâs easy to sit back and ride on our success. We have a strong work ethic. Itâs helped us in the end,â he says.

The band plays various venues, and they appreciate the fans and the memories made.

âGrand Olâ Opry was a highlight,â he says. âWeâve had lots of cool moments. Itâs one of those things you dream of â to perform and have people sing your songs back to you. It doesnât get any better than this.â ♦