Foreigner performs at the Iowa State Fair on Aug. 15 with Night Ranger opening. 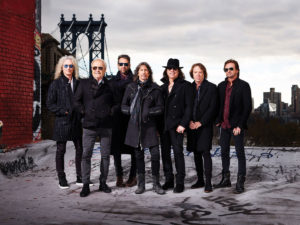 Before Tom Gimble joined Foreigner in 1995, he built an impressive resume. Heâd played two world tours with Aerosmith and appeared in âWayneâs World 2.â The tour wasnât the âcrazyâ Aerosmith of the 1980s; it was the âclean and healthyâ version. Gimble thought life couldnât get any better â until he joined Foreigner, where he could play other instruments including his guitar, saxophone, flute and keyboards.

âWith Foreigner, it was so much fun playing my guitar again,â he says. âOr playing âUrgentâ on the saxophone. I love all the instruments equally. My favorite is the one Iâm playing at the moment.â

Gimble plays with the rest of the band at the Iowa State Fair on Aug. 15, with Night Ranger opening. He estimates heâs played nearly 100 shows a year, adding up to more than 1,000 concerts. With 50 million records sold and 14 top-20 singles, hits such as âFeels Like the First Time,â include lyrics that are âjust plain good rock music.â

âNot every song is a headbanger or muscle and loud guitar,â he says. âLadies come and like the lyrics. Itâs great harmonizing.â

The song, âI Want To Know What Love Is,â is sung by a gospel choir on the original album. During their concerts, they bring in local school choirs to sing back up, giving them a donation.

âIt was Mickâs (Jones) idea to try to help the schoolsâ music programs. Funding keeps getting cut. Music helped me find my way in the school band. Maybe music can help a kid,â he says.

Gimble feels the lyrics and musical quality contributes to the bandâs success.

âOur lyrics have emotions people can relate to. Most people want to know what love is,â he says. âOften we attach a memory or certain feeling or time in your life that takes you back to those days. I love that feeling of what music does.â

He dispels a myth of partying in his down time, keeping it low key.

âI go to the bar every day,â he says. âThe salad bar, that is. Or I go to S.A. â Smoothies Anonymous. Iâm up to two a day and trying to cut back.â

His favorite hobby is golfing. It keeps him out of trouble.

He admits to being an open book and says heâs single, but married to his instruments. When told that Baby Boomer women are interested in him, he exclaims, âI need numbers. Whereâs the evidence?â

Whether itâs men or women, he appreciates the fans. He says music is the universal language between musicians and fans.

âTo the fans, thank you for listening. They are as important as us making the music,â he says. âPeople who really love music, I think of them as fellow musicians.â

Gimble says heâs fortunate to have played nearly every venue, including Carnegie Hall (his momâs favorite and most proud moment).

âI feel pretty good. It doesnât matter where we are. Itâs the people, seeing their faces light up and singing in the audience louder than the band,â he says. âItâs magnificent to be part of those moments where people come together.â ♦