When Kansas returns to Des Moines for a concert at Hoyt Sherman on March 8, it will be like coming home. Rich Williams, a guitarist for Kansas, explains to CITYVIEW why Des Moines holds such special memories. 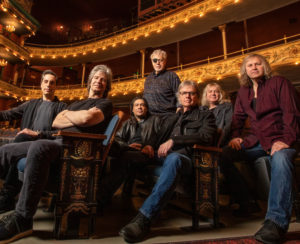 âWe had made a demo tape and (we were) playing at clubs in Des Moines,â he says. âWe got our first recording contract sent to us, and we signed it in Des Moines. We could sense the momentum changing while in Iowa.

âSix of us guys stayed in one hotel room, and we celebrated by buying baloney, bread and cheese from the grocery store. It was a great memory. We like Des Moines.â

Since then, Kansas has recorded 15 studio albums including eight gold, three sextuple platinum, one platinum live and two gold singles, âCarry On Wayward Sonâ and âDust in the Wind.â

The band is excited to get together, and their set list differs from previous concerts. For their 40th anniversary tour, theyâll perform the entire 1977 âPoint of Know Returnâ album.

The groupâs success can be credited to remaining true to the membersâ musical roots and ignoring trends, according to Williams.

âIn the early years, as music evolved, progressive rock was quite popular,â he says. âRecording executives tried to get us to change to disco. Thatâs not what we do. Our job is to be as quintessential Kansas. Trends donât work for us and never will. We are who we are.â

The band dispels the myth that theyâre a serious band â a big âthink tankâ of musical professionalism.

âWeâre not,â says Williams. âWeâre just a bunch of knuckleheads from Topeka who like to laugh. Weâre not these deep wizards. We laugh and have fun all the time.â

âWeâve said something funny, and people cock their heads sideways like the RCA dog,â he says.

He also likens the band to working for the circus.

âWe live on the other side of the curtain,â he says. âWe have our own lifestyle. When little boys join the circus, you can never go home.â

Most of the Kansas band members are now in their 60s and 70s, and Williams plans to continue playing the guitar as long as possible.

âMy fingers still work the same as they did then,â he says. âThereâs no point in not doing this.â

People have asked him how he can continue playing the same songs for 45 years. He replies, âMy friends have the same job since high school; it seems like a nightmare to me. This hasnât been like work for me.â

He adds that the older he gets, the more grateful he becomes.

âPlaying music is still my passion,â he says. âThe golden years are just starting. The longer I do this, the more protective and grateful I am for it. I have a deeper appreciation, and I can sense growing. I like it better today than I did last month.â ♦

Kansas performs at Hoyt Sherman on March 8. Tickets run from $54.50-$99.50; available at Ticketmaster or the Hoyt Sherman box office.