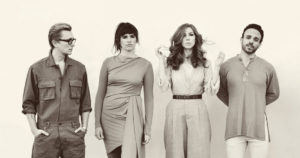 This month, Lake Street Dive releases its highly anticipated second album with Nonesuch Records (the first being 2016âs âSide Ponyâ), âFree Yourself Upâ â out May 4. The release date of the 10-song album also coincides with the start of the bandâs tour. The album takes its name from the chorus of the anthemic eighth track âYou Are Free.â

âItâs taken on more of a traditional sound,â Lake Street Diveâs drummer Mike Calabrese says of the album. âWeâve been touring a lot with our friend Akie Bermiss on keyboards, and he recorded with us on the most recent release (Free Yourself Up), so now we have a band thatâs piano, guitar, bass, drums, vocals. Itâs a very standard instrumentation.â

Recorded at Goosehead Palace Studios in Nashville from September to December 2017, the band chose to forgo working with a producer and decided to produce it themselves.

âThe very first one (recording project) was done entirely on our own, but we didnât know anything. Now itâs like, alright, I think after 14 years you can probably do it again. Part of it was also, âHey, think of the money weâll save,â â he laughs.

Going into the studio with Bermiss added an exciting new element.

âThe original four of us donât want to work without him,â he says. âItâs not just adding another instrument with him; itâs adding a new dimension to our experience.â

The four-piece band met when all four were students at the New England Conservatory of Music in Boston. Remarkably, no one dropped out to pursue music.

âWeâre all graduates. We are at our core all somewhat nerdy about music and fearful of the future. There was sort of a womb attached to the idea of going to music school, and we liked studying. Why not just milk it for all itâs worth?â

It seems Calabrese was destined to be in a band. His parents met while playing in a band, and Calabrese was gifted his first drum set at age 9 from his Uncle Larry.

âIt was an inextricable part of my young fantasies. It was definitely a drive of mine. Something I actually forgot about. Toward the end of high school and getting into college when music got âserious,â definitely something that reemerged as one of those nascent musical yearnings,â he says.

When the band was formed, founder and guitar player Mike âMcDuckâ Olson originally sought a âfree countryâ sound, which the band quickly ditched in favor of their more current sound.

Calabreseâs favorite band is Weezer, but he says thereâs more Janet Jackson and David Bowie on the new album.

âThereâs a lot of stuff coming out of us now that is based around the music that came out when we were pubescent and first attaching music to heavy emotional factors in our life. Iâd say weâre an emotional rock band. Weâre not emo, though, itâs tough.â

With plenty of touring ahead to promote âFree Yourself Up,â Calabrese says heâll go through more pairs of drumsticks than normal and estimates he goes through about 24 in a year. Currently his favorites to drum with are the Vic Firth MJC4, which are maple.

âRumor has it they have it in hickory,â he says excitedly.

Can fans expect to see him in his trademark bandanas while on tour this summer?

âAbsolutely, and I got some fancy new ones to share with the world, too,â he says, noting that a friend in Boston recently custom-designed a set of handkerchiefs after he brought her fabric samples.

âItâs kind of like my mood ring,â he explains of the headgear.

On tour stops, Calabrese likes to peruse vintage stores or even check out the local Target looking for more to add to his collection. He also fantasizes about a line of his own Mike Calabrese bandanas for fans to buy.

âHey, everybody needs a bandana, and why shouldnât it be me who provides them that?â he laughs.

Lake Street Dive will play at Simon Estes Amphitheater on Friday, May 18. They are the third act of the annual Nitefall on the River summer series. ♦