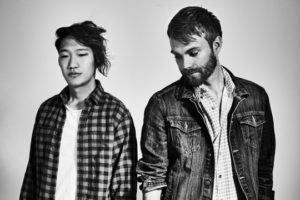 A friendâs bizarre joke, some weird vocal tricks and a former English teacher with a love of music, thatâs what created the band Handsome Ghost. This isnât just a man claiming to be a handsome ghost, because thatâd be vain, according to the founder of Handsome Ghost, Tim Noyes.

âThe songs come from an intimate place and I hope they (the fans) naturally connect to it,â Noyes said. âItâs honest and intimate.â

This debut song, âBlood Stutterâ which was released in 2014 helped launch the bandâs career and currently has over more than 1.5 million monthly listeners on Spotify â  no easy feat in the music world. Since 2014, the band has toured with Misterwives, Flor and Melanie Martinez to name a few acts.

Those performances are what make his music real to him, something more than a hobby. âIt makes music more than just creating music in your bedroom. People get to hear it and connect with it,â Noyes said.

Being honest and casual with his fans is important to Noyes, and that relationship comes naturally to him. âIâm not that mysterious tortured artist. Iâm still figuring out who I am musically. I think my music is genuine. Iâm just a guy who loves to write music. I love music more than anything.â

Handsome Ghostâs newest album, âWelcome Back,â took him four years to write and he hopes it illustrates the changes the band has gone through and how he has changed as a person. This is a continuation of the story of a relationship he shared through âBlood Stutter.â While this album builds on that story of a relationship, he hopes it provides closure to the story.

âItâs kind of sad and romantic in a way to be writing about something for so long,â  Noyes says. âI hope that this album is that closure and we can write about other topics.â

This music means something special to Noyes and he hopes his fans catch on to the connection he has with the music he has created over the years.

âIndie-Prom, to me itâs something different,â Noyes said. âI was in a folk band first, its different tones and sounds. It feels like a nice blend between traditional singer/songwriter, a guy with a guitar and electronic beats. Itâs the blend of two worlds.â

The Maintenance Shop in Ames will be featuring the band Flor along with Handsome Ghost on Thursday, February 8. ♦