Iowaâs Amish have some lessons for us 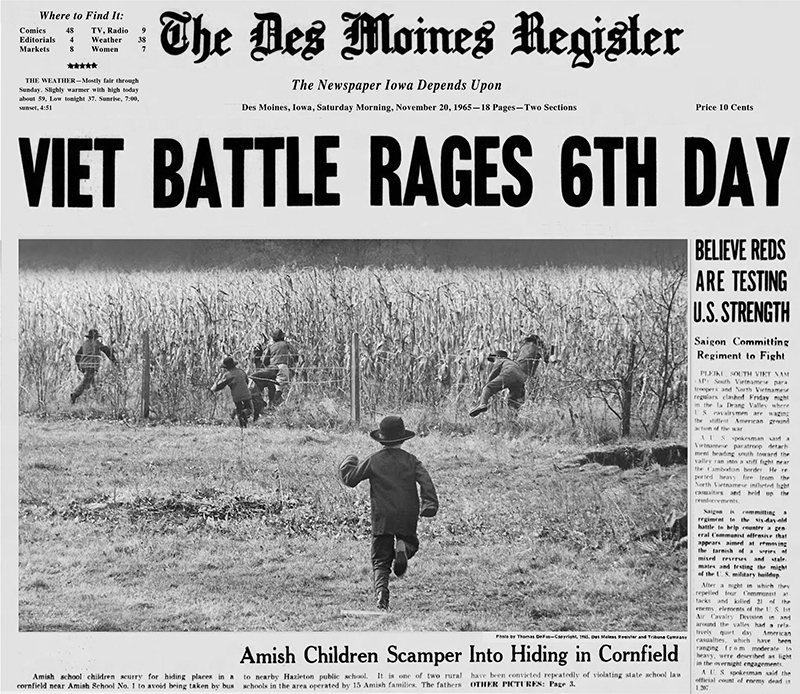 The Des Moines Register of Nov. 20, 1965, with photographer Tom DeFeoâs memorable picture, focused the nationâs attention on the Amish school issue. While some states fought all the way to the U.S. Supreme Court over the issue, Iowa resolved the dispute through discussion and compromise that culminated with lawmakers voting to exempt the Amish from Iowaâs education requirements.

The man who answered the door at a farm house west of Bloomfield one afternoon in the early 1970s was an imposing figure, even without that thick beard on his chin.

Gideon Yutzy was a member of the Old Order Amish religion. He was the patriarch of a family that moved into the countryside west of my hometown several months earlier.

That was 50 years ago. The arrival of the Yutzys began an Amish settlement that has grown to about 1,800 people today, making Davis County one of the largest enclaves of Amish in Iowa.

I was there at Yutzyâs front door to interview him. I wanted to ask about the legal issues surrounding attempts by state and local governments in the Midwest to force Amish children to be educated beyond the eighth grade.

In 1965, the issue boiled over near Hazleton in Buchanan County. A front-page photo in The Des Moines Register showed the nation what happened when government officials arrived at a one-room Amish school and tried to take the children to a public school.

Little Amish boys and girls scattered like rabbits into a cornfield. Within days, Gov. Harold Hughes imposed a moratorium on further attempts to force the Amish into state-approved schools. He wanted time to find a compromise.

It would be two years before the Legislature voted to exempt Amish parents from having to comply with state education laws. By then, the legal dispute, and some of the Hazleton families, had moved to Wisconsin.

In 1972, the U.S. Supreme Court finally brought clarity to the controversy, ruling that compulsory school-attendance laws were an unconstitutional violation of the First Amendment rights of the Amish to practice their religion without government interference.

That afternoon when I knocked on Gideon Yutzyâs door, he politely sent me on my way. He did not want to talk. What I did not know then was that he had more than just passing knowledge of the dispute over how the Amish practice their faith.

When the kids dashed into the cornfield, Gideonâs grandchildren were in the group. When Amish fathers were charged in Wisconsin with refusing to send their children to a state-certified high school, Gideonâs son was one of the defendants. And when the Supreme Court finally issued its landmark freedom-of-religion decision, called Wisconsin vs. Yoder, Adin Yutzyâs name was there at the top of the ruling, forever linking him to one of the pivotal court decisions in American history.

So why are these thoughts swirling through my noggin today?

Bloomfieldâs population grew 1.6 percent, meaning rural areas of the county were responsible for a bigger portion of the increase. And you can thank Gideon Yutzy and the Amish families who arrived after him for much of that.

There was another reason I was thinking about Iowaâs Amish, and this one is wrapped in controversy.

There are similarities and contrasts between how Amish parents were treated 50 years ago and the way parents of Iowaâs non-Amish children are being treated today â especially as Covidâs highly contagious Delta variant spreads rapidly.

Fifty years ago, Governor Hughes defused the Amish controversy by bringing the parties together to find a solution that was acceptable to everyone. It was not a quick fix, but he thought it was better to reduce peopleâs anxieties right away while officials searched for a long-term compromise. Hughes believed a permanent solution was preferable over continuing to jail and fine Amish parents and traumatize their children for standing up for their religious beliefs â beliefs that frown on modern conveniences like cars and electricity, government schools, and Social Security.

In the final analysis, allowing the Amish to operate their own schools with their own teachers and their own curriculum that ended with the eighth grade did not harm the non-Amish. But in the current controversy over efforts to mitigate the spread of coronavirus, many people think state governmentâs position making mitigation efforts optional, rather than mandatory, is harmful to those who are trying to keep their relatives and friends safe.

The law the Legislature and Gov. Kim Reynolds enacted this spring in the middle of the night has added to the public turmoil over Covid, rather than reducing it.

That is a big deal in elementary school where children are not old enough to receive Covid vaccinations. That is a big deal for families who have people at home with compromised immunity â a fact that makes them more vulnerable to the disease.

Plus, the Iowa Department of Public Health has stopped providing daily updates of the stateâs Covid data and has gone to once-a-week updates.

The controversy over mandatory masks vs. optional masks raises questions that Governor Reynolds should find uncomfortable â just as Governor Hughes found the nationwide attention and criticism uncomfortable when the photo of those Amish kids was published.

Reynolds says she trusts Iowa parents to âdo the right thing.â But does she believe the existing state laws that require a whole range of childhood immunizations before kindergarten should be optional, too?

Does she believe parents should have the right to ignore school dress codes â which prohibit kids from wearing such things as pants that defy gravity and donât cover boysâ rear ends, girlsâ super-short cutoffs, skin-tight leggings, or tops with spaghetti straps?

Questions like these occur when government officials make hasty decisions without carefully considering the consequences. ♦

Randy Evans can be reached at DMRevans2810@gmail.com.