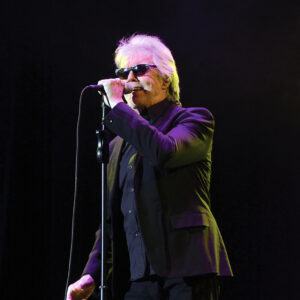 As classic rock bands tour, fans are eager to see the band âone last time.â For more than a half a century, Three Dog Night has performed to sold-out crowds. They continue with a concert at Hoyt Sherman Place on March 2.

Three Dog Night founder Danny Hutton patched in a telephone interview from his California home, where heâd been without power due to the recent flooding. Speaking from his home, formerly owned by Alice Cooper, he reflected on his musical career spanning more than 50 years.

Huttonâs career started off as a songwriter, and he considered himself a âstudio guy,â choosing who would sing which songs. He toured with and produced a song for the Sonny and Cher Show. He sang in a trio with original Three Dog Night band member Cory Wells, along with Brian Wilson from The Beach Boys.

âBrian was a good friend â he still is. He had a studio where the three of us would sing. Then The Beach Boys came back and asked us who we were and said they needed a hit song and so Brian left the trio,â he recalled.

Once Three Dog Night formed, the hits kept coming, starting in 1969. Some of the top songs include âJoy to the Worldâ (a.k.a. âJeremiah was a bullfrogâ), âBlack and Whiteâ and âShambala.â Between 1969 and 1974, no other musical group achieved more top 10 hits. They also had 21 consecutive Top 40 hits.

When I related to Hutton that I sang âJoy to the Worldâ in grade school choir, he said it was a hit among all age groups.

âIt was a song that was all over the map. Vietnam was going on, and we wanted a song that wasnât deep stuff or a 10-minute-long song,â he explained.

Thatâs why his songs have endured throughout the years, he said. âTheyâre not political. Itâs all about emotions, happiness, love and party songs. Thatâs our style.â

Over the years, the band has cycled through 15-20 different musicians, but one common powerhouse is in the vocals.

âThe bandâs songs are melodic, and we always sing with a chorus. The vocals during concerts and recording is always turned up,â Hutton explained. âWeâve kept the harmonies up loud. We eat the mics and sing as loud as you can. We donât sing like background singers. We stay the lead.â

âThat was the highlight. John came in with a girlfriend â not Yoko. John was very nice, quiet and calm,â he recalled.

Another celebrity he met was Stan Laurel from Laurel and Hardy.

âI found his name in a phone book. I called him up, and we spent the day together. He sent me a postcard, which is the first thing Iâd grab if the house was ever on fire.â

Huttonâs son, Tim V. Hutton, plays bass with the band. Once, when he had his kids backstage at a concert, Frankie Valli babysat for him.

Three Dog Night has completed a new album, which is due out this year.

âItâs the first record since 1978. Iâm thrilled,â he said. âWeâll sing at least one new song in the set. Weâll put it out to see the reaction and look at what people are downloading first.â

âIâve seen reviews of different groups saying they canât hit the high notes. I never want to have a review like that,â he reflected. âIâll keep doing it as long as I can. Weâll kick butt every night. If audiences leave with a smile on their face, that makes me happy.â ♦