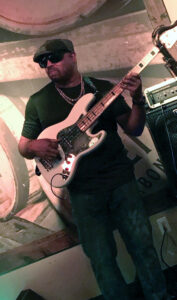 As Terre Gibson strums his bass guitar to âKissâ by Prince â a favorite song by one of his musical idols â he insists on allowing the other musicians to shine, as heâs ânot trying to be the star.â

However, Gibson, with a classically trained piano background, knows his job is to stay on key in any of his four bands, whether itâs funk, rock, jazz or Christian music.

Gibson began playing piano and taking lessons at age 5 when he lived in California. At age 14, his music tastes took a sharp turn when he attended a Rick James concert.

âI heard Rick play âSuper Freakâ and âGive it To Me Baby.â I heard the bass thumping and saw all that dancing,â he said. âI thought, âThatâs an instrument I want to play.â â

At age 15, he received a bass guitar for Christmas, along with an instructional book, and he taught himself the bass. It came easily for him, as he was used to reading music.

In addition, he listened to bass songs on the radio, trying to copy the bass line.

While raising a family, he didnât play. In 1998, he re-emerged to play in church and then joined his first band.

Moving to Iowa in 2005, Gibson hooked up with another church band but wanted to play mainstream music. He searched on Craigslist in 2017 and joined the Des Funk band, which performs instrumental jazz.

He hooked up with two other bands, The Dick Danger Band and The Feel Right. The Feel Right includes âThe Voiceâ contestant Sharane Calister.

âSheâs extraordinarily talented and easy to work with,â Gibson said. âIâm afraid of losing her as she goes on to bigger and better things.â

When Gibson moved to Iowa, he was leery of finding the same caliber of musical talent he observed in California.

A reason he likes the bass is how it can drive the rhythm and speed in a song. Heâs able to control the dance numbers.

âFor example, if the drummer is too slow, we can change our technique. I donât think a lot of people know the bass exists. They hear it but donât know what it is,â he explained. âPeople dance to the beat of the bass.â

Gibson is modest when it comes to his talents, shrugging it off and crediting fellow band members. Once the crowd reacts, heâs happy to be in the background, keeping the beat going. One evening, Des Funk played at Noce to a standing room-only crowd.

âWe were shocked because it was a snowy night. I was impressed with the turnout,â he said.

A concert at Ankeny SummerFest with the Dick Danger band was âcoolâ when 100 audience members all danced in sync to the âCupid Shuffle.â

âItâs fun to see people dancing and a wonderful moment to see that from the stage.â

Gibson is exploring a fifth band and said he enjoys where he is at, adding, âI donât have visions of grandeur. Iâm here to support the kids and grandkids â and let them take on the world.â

He said he feels the Des Moines music scene is talented and believes in supporting local music.

âWe donât get a lot of worldly musicians touring here. Supporting local music is the next best thing. If people get out to various local bars and venues to see live music, I think they would all be very impressed.â

Find Gibsonâs thumping bass with The Feel Right at the Covered Bridges Winery Oct. 15 and the Huxley Spooktacular on Oct. 29; or Dick Danger Band at Summerset Winery on Oct. 16 and Down Under on Nov. 12. ♦