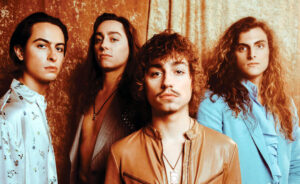 Greta Van Fleet performs in their âDreams in Goldâ tour at Wells Fargo Arena in Des Moines on Sept. 21. Special guests include Houndmouth and Robert Finley.

A rock band formed only 10 years ago has stormed the music scene, creating a positive and lasting impression in the rock and roll world.

Greta Van Fleetâs explosion into the rock scene garnered attention when they won a Grammy award in 2019 for the Best Rock Album for the EP, âFrom the Fires.â

Their newest album, âThe Battle at Gardenâs Gate,â debuted at No. 1 for the Billboard Rock, Hard Rock and Vinyl categories. The band is young: members currently range from ages 23-26. Jake Kiszka, guitarist, told CITYVIEW the Grammy award was a huge achievement.

âItâs a reaffirmation of what weâre all doing. It was a great honor to receive it, but that doesnât change anything about the band,â he said.

Jake and his twin brother, Josh, along with their younger brother, Sam, formed the group after jamming at home. They added friend Danny Wagner as a drummer.

The Kiszkas grew up in Michigan listening to their parentsâ records. They cite a heavy blues influence to their music.

âWe found that our parentsâ music â Muddy Waters, BB King â thatâs one of the reasons I picked up a guitar,â Jake said. âOnce I discovered how a slide guitar sounded, it really adds another element.â

They chose the name of their band from a fellow resident in the Kiszkasâ hometown. Gretna Van Fleet was a âsweet old grandmaâ and a town elder who gave her blessing for the name. Thereâs no hidden meaning â they simply liked the sound of the name.

Playing in a band with his brothers wasnât always a given.

âI always wanted to put together a group. I never imagined it would be with my brothers,â Jake asid. âItâs organic â a course of least resistance. Playing like that together just happened.â

In their five years of touring, theyâve witnessed everything from small crowds to fans singing along with âHighway Tune,â shouting at the top of their lungs. As 20-somethings, they see people their own age, but mostly all ages at their concerts.

âWe see 8 to 80, from all ages, and itâs profound to see. The core group of our generation inhabits it â itâs like the reinvention of rock and roll,â Jake said. âItâs an evolution of that type of music and the tradition of it being carried down to the next generation.â

During their short tenure, they played with some of their musical heroes. Theyâve joined Metallica in Las Vegas. They performed with Elton John and Bob Seger. Opening for the Foo Fighters in Quebec City was a memorable experience.

âEveryone was chanting our name. With 300,000 people, it was a surreal moment, which really made a big impact,â he recalled.

When asked what musician he would most like to perform with â dead or alive â Jake paused, saying, âThereâs so many. Jimi Hendrix. Iâd like to learn the secrets of the old master. Thereâs a lot of early blues musicians who were very influential.â

Performing together side by side with his siblings has resulted in little conflict; the band is continuously energized by their concerts.

âItâs a miracle where weâre at. Itâs pretty cohesive â we havenât been worn down by the touring. Every day is exciting. Weâve gone from nothing to something. Itâs pretty miraculous.â

Jake said heâs pumped to return to perform in Iowa.

âItâs nice to finally see the light of day and have the opportunity to tour again. We love and appreciate people coming around to see us.â ♦