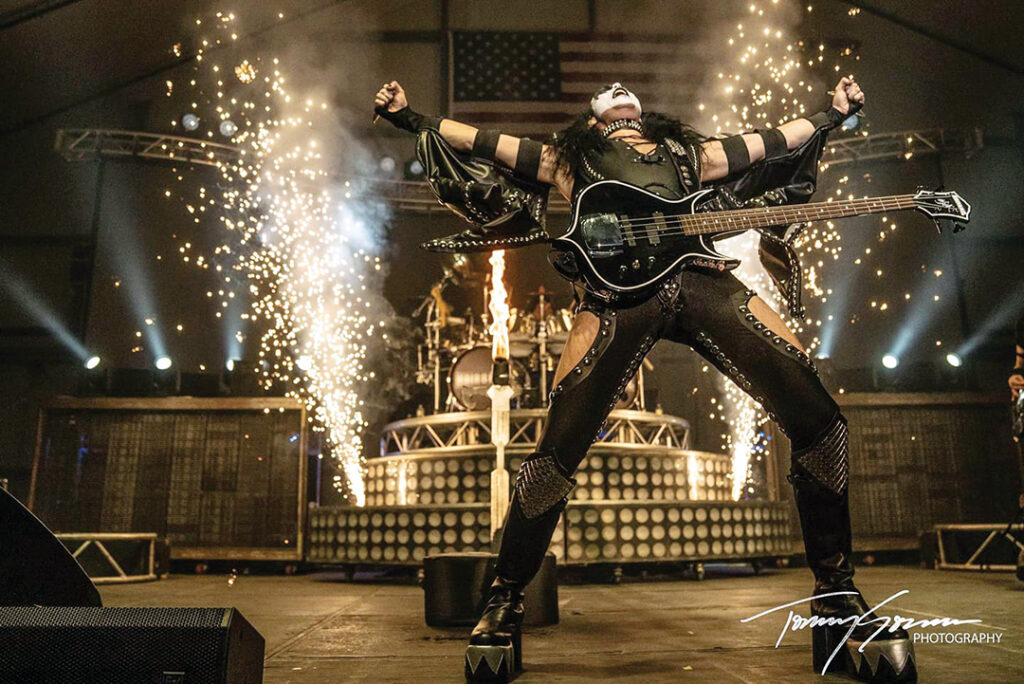 When you want to listen to some classic rock and roll music from the 1970s or 1980s, what concert do you attend? AC/DC? KISS? Van Halen? Queen? Good luck finding those bands on tour.

But how awesome would it be if all those rock gods came to Iowa in one night?

Concert fans can come pretty darn close to the real rockinâ deal when they attend a Hairball concert at the Iowa State Fair on Aug. 16 and 17.

What exactly is Hairball? (No, itâs not cat-related.) Hairball is based in the Midwest but tours across the United States. They formed 21 years ago playing cover songs of the top arena rock bands. Their name honors the big hair bands of the 1980s. Not only do they sound spot on, they dress the part of the iconic rock stars, too.

Dave Moody, who is a bass player and singer with Hairball, said all the musicians perform multiple roles, playing instruments and singing.

âWeâre all like a Swiss army knife,â he said. âWe can do lots of things on stage.â

As musicians take on the rocker persona, Moodyâs acts include Brian Johnson from AC/DC and Gene Simmons of KISS.

Moody grew up in Louisville, Kentucky, home of country music. When he was 6 years old, a KISS Destroyer record from K-Tel was delivered to his home. He was instantly hooked.

âI couldnât believe what I was seeing or hearing,â he said. âI knew I wanted to do the same thing in my life.â

Moody played bass guitar for Billy Ray Cyrus and Thunderstruck, an AC/DC cover band. He joined Hairball one year ago.

Whenever he readies to play the part of Simmons, he applies his own makeup.

âBefore I got in a band, I never wore makeup. Itâs still interesting to learn how to do it. Now I look at women and see how they do it. Some of them could do better,â he laughed.

In addition, he wears Spandex and high heels.

âWe stay in shape and donât eat all the Twinkies. I run 5 miles a day to keep in shape. You canât hide â Spandex keeps you honest.â

The music and songs resonate with the crowd, which sings along, cheering and screaming with the pyrotechnic lights and show. Moody says the songs lend to simpler times.

âIf you were a child of the 1980s, you know what the music was all about. It was about having a good time. Itâs a time to forget your troubles and celebrate life,â he said. âItâs a wonderful, powerful thing when we can connect with the crowd.â

âOur job is to play as you remember the songs and what it looked like when you watched the videos,â Moody said.

âWe genuinely enjoy each otherâs company. Whatâs not to laugh about? Flames are in the air. We just blew off $5,000 worth of pyro â whatâs not to smile at?â

The band recently played five days in Alaska, where they were embraced like they are in the Midwest.The band has played the Surf Ballroom in Clear Lake numerous times.

âIâve played at the Grand Ole Opry, and the Surf is on par when it comes to venues,â Moody said.

He and the band have a fondness for Iowa.

âThe Midwest and Iowa are spectacular. If youâre either a Hawkeye or a Cyclone, I love you both equally,â he said. âWe canât wait to see you at the Iowa State Fair. You know the drill. We know whatâs gonna happen. We bring in the soundtrack â you bring in the beer. Letâs get it on.â ♦