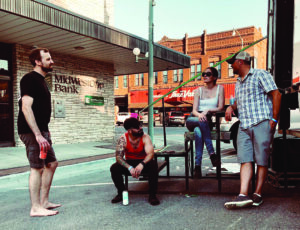 Cardinal Sound is a progressive bluegrass and Americana rock band based in Des Moines. Photo submitted

But if youâre craving a refreshing musical change of pace, then take in a concert from Cardinal Sound.

Cardinal Sound is a bluegrass, Americana band that plays both original and cover songs. Their biggest musical bluegrass influence includes bands such as Trampled By Turtles, Billy Strings and Railroad Earth.

Cardinal Sound was founded by Brian Berry and Jeremy Nelson. The pair played and sang together at college parties. When Berry returned from Seattle 10 years ago, the band formed, both writing and singing songs. Nelson moved away, and current band members include Berry on guitar and vocals; Kathryn Fox, fiddle and vocals; Justin Goes, bass guitar; and Russ Tomlinson, drums.

Berry came up with the name Cardinal Sound as a cardinal is typically a Midwest bird.

Bluegrass music has been around the U.S. since the 1930s and varies from other types of music as it typically includes string instruments with a high-energy fast tempo. Typical bluegrass music doesnât have a drummer, but Cardinal Sound does.

Bluegrass is popular in its birthplace of Kentucky and surrounding states. The name âbluegrassâ comes from the fields of Kentucky, when settlers thought the fields of grass looked blue. The Father of Bluegrass, Bill Monroe, hailed from Kentucky â thus, the genreâs name.
If youâre an âO Brother Where Art Thou?â fan, youâll recall the Soggy Bottom Boys cheerfully sing bluegrass music and other folk songs throughout the cult classic movie.

Bluegrass is wildly popular in Colorado with the Telluride Bluegrass Festival. Festivals all around the Midwest are popping up that include bluegrass and folk music. Cardinal Sound attracts new fans at each of their gigs. Some concert-goers are initially unsure of what bluegrass music is.
âSome confuse us with country music â which weâre not,â Berry said. âWhen people see us for the first time, thereâs lots of interest.â

In addition to Americana and folk music, theyâll throw in some jam band music from the Grateful Dead, Pink Floyd and Phish.
âWeâll even play some Talking Heads with a bluegrass twist and other popular music for fun,â Berry said. âWe love to see people out dancing.â

The band has written and released one album and is currently writing songs, hoping to record a second album. Band members do double duty with other bands, such as Fox, who plays fiddle with the String Profits.

Festivals and local bars are a good place to discover Cardinal Sound. Theyâve played on the local stages for the 80/35 Musical Festival, Hinterland, Ingersoll Live and the Pirates of Ponderosa in Montezuma. Breweries and wineries, including the iconic Greenwood Lounge, are some of their favorite places to play.

This summer, the band will play on the stage at the Des Moines Arts Festival.

âWeâre super excited about the arts fest and getting back to playing outdoor festivals,â Berry said. âCOVID has pushed things back, and weâre happy to play again.â

Take a chance, central Iowa, and take in a string-pickinâ, boot-stompinâ Cardinal Sound concert this summer.

Cardinal Sound performs at the Des Moines Art Festival on June 25; Alluvial Brewing in Ames on July 16 and Cellar Peanut Pub/Gezellig Brewing in Newton on July 23 for the summer music series.