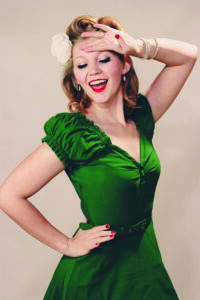 You can catch performances of local singer Patricia Holly with Satin Dollz at Noir in Ames on Friday, Dec. 3 and Sunday, Dec. 5, or at Sweetwater CafÃ© with Holly & Bochart on Sunday, Dec. 12.

Patricia Hollyâs greatest desire as a singer and actress is to convince talented musicians and actors to stay in Iowa. After all, thatâs what Holly did after a brief stint in Los Angelesâ entertainment industry.

Holly grew up in Waukee, and at 8 years old, she admired her older sister, Sarah, who played in a band.

âI saw her playing the piano and thought it was cool,â she remembers thinking. âShe wrote songs from scratch.â

Holly sang in Waukee High Schoolâs jazz and show choirs and won a âWaukee Idolâ competition. As a teenager, she began writing music and playing the guitar. She landed her first musical role at the Des Moines Playhouse for the part of Sister Mary Robert in âSister Act.â

After high school, Holly served in the U.S. Marine Corps and continued to write music, while also acting in several commercials, one for the Iowa Lottery and another for Best Buy.

In 2018, she won the Minnesota division of the PBS television talent search show, âThe Celebration of Music.â The show has yet to be aired due to the pandemic, but it is a career highlight.

âThere were so many moving cameras,â she says. âIâll be excited to see it air.â

The same year, she acted in a Christmas movie, âChristmas Break-In,â streaming on Netflix and became a member of the Screen Actors Guild.

In 2019, she moved to L.A. and joined a singing jazz group, Satin Dollz, which performed in Paris, London and other locations before the pandemic. Satin Dollz recently created a Midwest version.

The lure of living in an entertainment mecca was short lived as Holly missed Iowa. She says itâs a misconception that Iowa is slower, but it is a different mindset.

âWhen people move to L.A., they donât realize the traffic is insane, the cost of living is high. In L.A., everyone has to look out for themselves,â she says. âL.A. wasnât for me. Iowa is welcoming and uplifting and helpful. I like looking out for others besides myself.â

Since moving back, she finds acting opportunities mostly in Minneapolis. She performs locally with a singing duo, Holly & Bochart, and recently performed at the Bart Howard Lounge in Burlington. Sheâs writing music and working on her first album, hoping folks continue to embrace Iowansâ talents.

âIowans get excited because Iowans make it big â thereâs the Jason Momoas from Iowa. If people could embrace artists in Iowa, it could explode,â she says.

âIf we can convince talented people to stay put, we could grow the industry and give local talent a chance,â she says. âI love it here. I feel lucky I get to do this for a living.â

You can catch Patricia Holly performing with Satin Dollz at Noir in Ames on Dec. 3 and Dec. 5 and at Sweetwater CafÃ© with Holly & Bochart on Dec. 12. ♦