âThe more beer you drink, the better we sound.â 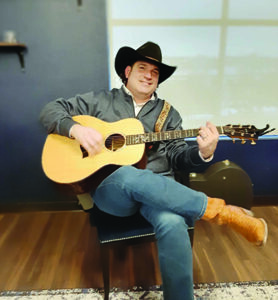 Jesse Gutierres will play at the Iowa Distilling Company on Nov. 26 along with special guest Donnie Steele.

Attend a concert or a one-man show by singer Jesse Gutierres and youâll be treated to a classic country, honky-tonk, boot-tapping evening. His rich baritone with occasional twang is reminiscent of Gutierresâ old time heroes, Merle Haggard, Waylon Jennings and Hank Williams, Jr.

With a slight southern accent, Gutierres is at ease in front of the audience as a solo gig or with either of his bands, Jesse & The Medicine Men or Hillbilly Air Show. He sets up a song with a story, such as âHow many of you ladies have experienced this?â he asks. Then he belts out the lyrics, âSheâs a good-hearted woman in love with a good-timing man.â

The crowd sings along while superfan Steve walks up and hands Jesse a piece of paper tucked with a $20 bill. After the song ends, he reads the note, holds up the bill, saying, âThis isnât necessarily a family friendly song, but this might change my mind.â

After plucking a few chords on his guitar, he begins singing the song, âThe Ballad of Dick and Jane.â The manâs name represents a male body part, and, before long, the crowd roars with laughter, while a few ladies grin sheepishly. Google the lyrics and youâll catch on.

Gutierres explains, âThereâs a need to have humor in a country song. Itâs not all sadness and heartbreak. Those humorous songs relate to the audience, giving a sense of camaraderie.â

He began singing in public at age 5 with his dad, to an Elvis or Buddy Holly tune. He sang acapella with a church choir in Oklahoma and taught himself to play guitar in his teens. When traveling in the family station wagon with a captive audience, he sang along with country tunes on the radio.

Gutierres knows about 500 songs by heart and has written nearly 200. Songwriting is his passion, as heâll get a beat going over the potholes while heâs driving along.

As a Desert Storm veteran, his band sang for a USO Salute The Troops tour as an âopener for an openerâ for a Kenny Rogers concert.

Heâs got a diverse set of fans from teens to seniors who follow his music at rodeos to wineries. Whichever generation listens, he wants people to learn about country musicâs roots.

âIâd like people to educate themselves about what country music is or is not,â he says. âIt doesnât come from New York or California. Real country music isnât pop music. It makes my soul happy.â

His happy place is playing for a crowd no matter if it consists of thousands or in a âpodunkâ place where he can make people smile.

As the crowd claps and cheers, Gutierres strums a chord, giving advice.

âThe more beer you drink, the better we sound,â he says in his distinct country voice.

You can catch Jesse at the Iowa Distilling Company on Nov. 26. ♦