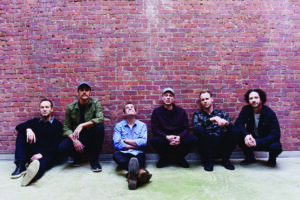 If you attend an Umphreyâs McGee concert one week, it might not be the same set list the next week. They might play a rock and roll tune that melds into a reggae rift by its end. Or it could be part blues, pulling from one of their dozen albums.

Whatever genre they play, itâs a powerhouse explosion from the self-proclaimed improv rock band. Umphreyâs McGee guitarist and vocalist Jake Cinninger spoke to CITYVIEW prior to their Aug. 15 concert at Lauridsen Amphitheater at Water Works Park in Des Moines.

âEvery night is a completely different show. We flex on our imagination. Weâre like the black sheep. Itâs both a blessing and a curse,â he says.

Curious about their sound? Open up YouTube to be mesmerized by a 13-minute song with a synchronizing light show. Within that song, the band plays a âjam vehicle.â

âWe might open up with a familiar song and stray from the original. We never know at that point,â he says. âItâs like searching for a needle in a haystack.â

The band has toured together for 22 years. Their first show was outside of Chicago, and they slowly made their way west, including Iowa stops early in their career. In recent pre-COVID years, they played 85 concerts a year, including Lollapalooza, Austin City Limits, Red Rocks and Bonnaroo.

The secret to their longevity as a band is the members focus on their friendship.

âWeâre friends first, then we pick up our instruments before the business of music,â says Cinninger. âWe check in and see how everyoneâs doing. Itâs a true fraternal spirit.â

Their latest album, âYou Walked Up Shaking In Your Boots But You Stood Tall and Left a Raging Bull,â is a mouthful, but itâs designed to be memorable. The album was named when Cinninger played with Los Lobos at a concert and one of the band members told Cinninger that was a description of how he played.

Umphreyâs McGee embraced the Internet early on to update their fan base, but Cinninger doesnât have his own social media site. He explains, âI donât want to see what people think of me. It messes with my creative artistic algorithms and keeps my art pure.â

Fans of all ages, who tend to like all musical genres, attend their concerts.

âWe attract people who like the human tendency of taking risks,â he says. âEverything canât be a 10, but 85% of the time we nail it.â

Cinninger agrees that the best listeners are in the Midwest, where the band is originally from.

âThereâs no big ocean to escape to. Our escape is to turn on the stereo and listen. The magic of music makes us happy,â he says. ♦