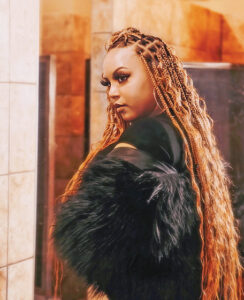 Des Moines native Sharane Calister took the stage on the TV show, âThe Voice,â and began singing âMake It Rain,â hoping for a judgeâs chair to turn. It was nerve-racking, but her determination brought her this far. She auditioned three times for âThe Voiceâ and was rejected three times. Each time she took the judgesâ suggestions, bettering herself. The fourth time, for Season 14, she was in.

âOn stage it was nerve-racking,â she says. âYour idols are 50 feet away. I love Alicia Keys, and I tried not to pass out on stage.â

By the end of the song, she received a chair turn from both Keys and Kelly Clarkson, choosing Keys as her coach. She was eventually eliminated from the show, but being a contestant on âThe Voiceâ gave her confidence and notoriety.

âIt helped me tremendously. It gave me recognition and has given me more opportunities,â she says.

Sharane returned to Des Moines and since then has released her second single, âParty Like Thereâs No Tomorrow,â available on streaming devices. The song was written during the pandemic, when canceled gigs meant extra time on her hands.

âWhatâs the first thing that people are going to do once the coronavirus is cured? Party like thereâs no tomorrow. It defines a party song,â she says. âThe lyrics tell it all. I want to hang with my girls and get ready to go out.â

Sharane performs solo acts and sings with the local band, The Feel Right. Sheâll sing at nonprofit events, especially benefits for foster kids, as she was in the foster system herself. She serves as an advocate for kids in and aging out of foster care. She held a summer camp for foster girls, teaching them life skills.

âI tell them life can go their way. Donât let the bad part of life define yourself,â she says. âIâm a walking testament to say, donât quit. I was rejected three times before getting on âThe Voice.â Donât get discouraged if youâre told no.â

Often at gigs, people approach her and exclaim, âYouâre her!â New fans who donât know her suggest she try out for âAmerican Idol.â After a performance, she feels recharged.

âItâs like a breath of fresh air,â she says. âAt the end of a performance, it almost makes me cry. People come up to me and tell me how my singing made them feel. I did my job of touching their heart with my music. When you sing with passion, others feel it.â

Her long-term dream is to sing full-time. Sheâs working on an EP and hopes to perform and tour at larger venues. She feels confident her music will take her far.

âI know one day I can win a Grammy,â she says. âSomeone out there can use my music.â ♦