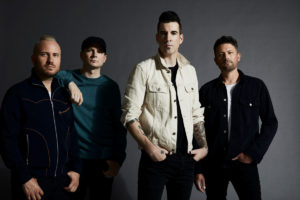 For the band Theory (also known as Theory of a Deadman), performing in Des Moines is like coming home. Theory was scheduled to perform at the Val Air Ballroom on May 5, with special guest opener, 10 Years, but the concert has been postponed.

âDes Moines has a lot of nostalgia. Itâs the first place we toured in 2000,â he says. âLazerfest was always supportive of us, and itâs great to go back. Thatâs a lot of history.â

Theoryâs âSay Nothing World Tourâ is based on their latest album, âSay Nothing.â The album debuted at No. 2 on the Billboard Alternative Album list. One of their songs, âHistory of Violence,â portrays a woman, fed up with domestic violence, who takes matter into her own hands and ends up in prison.

Tyler says the lyrics are important.

âWe thought ,why not help people and raise awareness at the same time,â he says.

Lyrics to their other songs are highly emotional and affect not only the listeners but the band as well. Fans approach the band, sharing personal stories of how their music helped them.

âThatâs the stuff that chokes me up,â he says. âItâs not expected. We didnât make music to get a specific response. We just like to make music.

âWeâve had fans tell us they wanted to kill themselves or gotten into drugs. Our music helped them get through dark times,â says Connolly.

âPeople are crying, telling us their stories, and here I am, trying not to cry. Itâs an amazing bonus to help people out with our songs.â

Connolly says itâs interesting how lyrics either provide escapism or reality, as portrayed in another song, âWorld Keeps Spinning.â

âSometimes music is an escape from reality. Escape is what makes sense. Itâs good to have a reminder of whatâs going on, whatâs more realistic,â he says.

âSometimes the lyrics fit. Itâs important to talk about tough things. Honesty comes from an unconscious place. Iâm not always sure what the hell Iâm talking about or what will come of it,â he admits.

A strong bond with the band is they view themselves as family.

âWe actually like each other. Bands come on our tour bus, saying they hate their band. That must suck,â he says. âWe lucked out, and we all get along.â ♦