TOAST3R pops up the hits 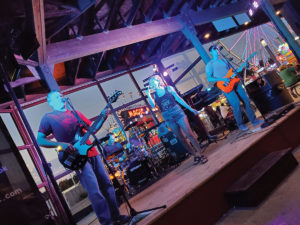 When Steve Radke played golf with his buddies at Woodward Granger High School, they discussed putts and birdies, but also guitars and music. He and two other guys formed a band in their garage, later renaming it Toaster in 1993. Original band members Radke and Mark Manning remain in the current band. Recently, the group replaced the âEâ in Toaster with a â3.â Radke explains why.

âWe always do a toast with the band, saying, âon the count of 3,â we toast the crowd,â he says. âWe thought itâd be a fun way to spell our name.â

âOpening for some of those concerts was a blast,â says Radke. âLoverboy was a fun show.â

Many of the shows include big musical tunes from Journey, Boston and Toto. âBallroom Blitzâ is a favorite to play.

âItâs a hard song to pull off,â Radke says. âSome songs are vocally challenging. But we try to do different radio hits that everyone knows, but that other local bands donât cover. People are blown away by some of the songs we do.â
Radke says the bandâs strength is that all of the musicians sing on nearly every song.

âWe have the ability to sing complex harmonies,â he says. âWeâre very vocally oriented and showcase songs with big vocals.â

The set list changes based on the venue. With a laundry list of songs, the band is known as an outdoor party band. They recently finished a gig at the Iowa State Fairâs Steer and Stein.

âWeâve been their house act for the past four years. We always see new faces and new crowds every year. Itâs good for the masses who have never heard of us to get in front of new faces,â says Radke. âSome of our fansâ kids are listening to us. One young man said, âMan, my parents love you guys.â â

All band members have day jobs, working to balance family life. The bandâs goal is to keep reproducing songs like theyâre supposed to be played.

âI like what weâre doing now and the fact weâve been going at this for years. Itâs neat people are still booking us. I didnât think it would last this long starting out in our garage,â he says. âItâs something we enjoy. Music is what we do.â ♦